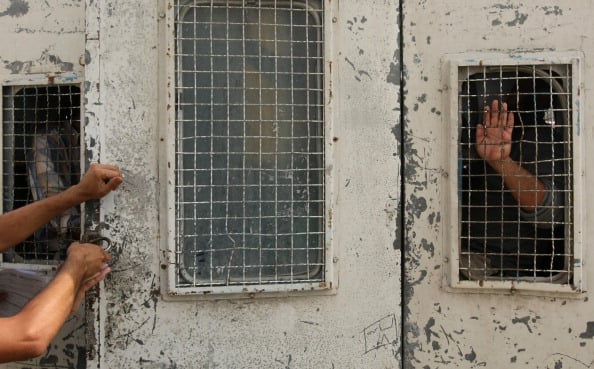 Four people were injured on Saturday when a fire broke out when prisoners rioted at a prison in northern Saudi Arabia during weekly visiting hours, a spokesman for the prisons authority said.

The Saudi state news agency SPA quoted the official as saying that authorities restored order while firefighters put out the fire.

“Two security men and two prisoners were injured and were transferred to hospital for the necessary treatment,” SPA quoted the spokesman as saying about the incident at the Buraidah prison.

The spokesman provided no further details and the exact sequence of events was not clear.

“Concerned authorities have began investigating the causes of the fire and the rioting that accompanied it,” he said.

Saudi news website www.sabq.org said that gunshots were reported during the riot. It quoted sources at Buraidah’s King Fahd hospital as saying that two inmates had been admitted with gunshot wounds, while two security men were treated for bruises and discharged.

A woman who works at the prison was also in hospital suffering from smoke inhalation, it said.

The Saudi prison official made no reference to gunfire.

Local residents said the rioting occurred at a facility in the old part of the al-Qassim provincial capital where inmates that have been jailed for criminal offences are held.

Prisoners held for security offences or involvement in anti-government political activities are held at a different facility far from the site of the riots, they said.