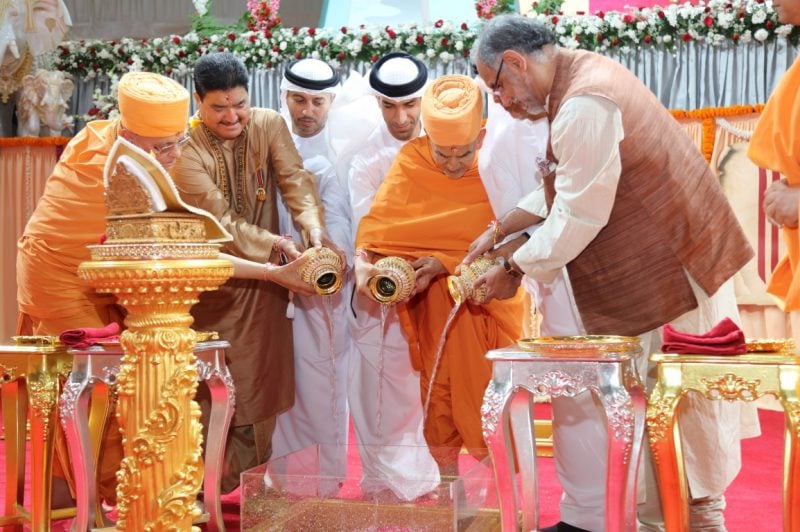 The foundation stone has been laid for Abu Dhabi’s first Hindu temple, which is expected to be completed in 2020.

The stone was laid in the Bu Marikha area on the Abu Dhabi-Dubai Highway, the first of many that will make up a 55,000 square metre cultural complex featuring an art gallery, halls, library, gym, and more, according to the UAE’s state news agency, WAM.

Numerous dignitaries attended the stone laying ceremony, including the Minister of Climate Change and Environment, Dr Thani bin Ahmed Al Zeyoudi, the Minister of State for Higher Education and Advanced Skills, Dr Ahmad bin Abdullah Humaid Belhoul Al Falasi; and Mahant Swami Maharaj, the spiritual leader of BAPS Swaminarayan Sanstha – the religious and social organisation building the temple, along with Navdeep Suri, Ambassador of the Republic of India to the UAE.

“The UAE boasts a privileged status regionally and internationally thanks to the values of religious diversity, pluralism and cultural harmony, which have encouraged the peoples of more than 200 nationalities to live in the country in peaceful co-existence,” said fellow attendee, Dr Mugheer Khamis Al Khaili, chairman of the Department of Community Development – Abu Dhabi.

“Laying the foundation stone of the temple is reflective of the landscape of tolerance and pluralism in the UAE. The Founding Father, late Sheikh Zayed, always believed that co-existence between peoples of various religious beliefs and nationalities is the only way to establish international peace,” he added.

The temple – estimated to cost Dhs400-450m – is being built on land donated by the Abu Dhabi government during a visit by Indian Prime Minister Narendra Modi in 2016. The ground-breaking ceremony for the temple was held a year ago.

The structure will feature seven spires, with five ornate domes being entirely sculpted from stone by hundreds of artisans in India. Once ready and numbered, thousands of such stone pieces will be shipped to the UAE and assembled on site like a giant 3D jigsaw puzzle.