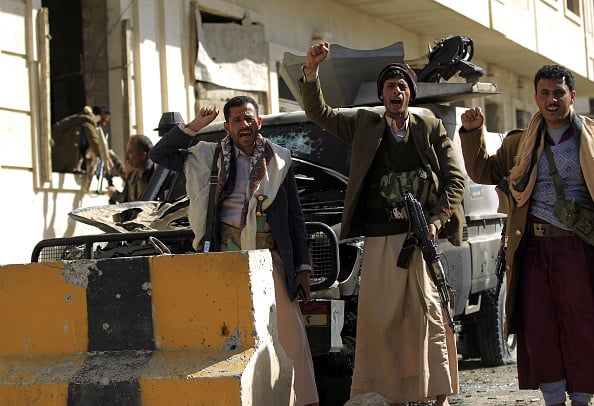 Yemen’s steely former president of 33 years, Ali Abdullah Saleh, made his last political gamble and lost on Monday, meeting his death at the hands of the Houthi movement, his erstwhile allies in the country’s multi-sided civil war.

Officials in his General People’s Congress party (GPC) confirmed to Reuters that the 75-year-old Saleh had been killed outside the capital Sanaa in what Houthi sources said was an RPG (rocket-propelled grenade) and gun attack.

A master of weaving alliances and advancing his personal and family interests in Yemen’s heavily armed and deeply fractious tribal society, Saleh unified his country by force, but he also helped guide it toward collapse in its latest war.

The Middle East’s arch-survivor once compared running Yemen to “dancing on the heads of snakes”, ruling with expertly balanced doses of largesse and force.

He outlived other Arab leaders who were left dead or deposed by uprisings and civil wars since 2011.

Cornered by pro-democracy “Arab Spring” protests, Saleh wore a cryptic smile when signing his resignation in a televised ceremony in 2012.

Saleh waged six wars against the Houthis from 2002 to 2009 before he made an impromptu alliance with the group that seized the capital Sanaa in 2014 and eventually turned on him.

The two sides feuded for years for supremacy over territory they ran together. The Houthis probably never forgave his forces for killing their founder and father of the current leader.

Fearing the Houthis are a proxy for their arch-foe Iran, the mostly Gulf Arab alliance sought to help the internationally recognised Yemeni government win the conflict.

Saleh’s army loyalists and Houthi fighters together weathered thousands of air strikes by a Saudi-led military coalition in almost three years of war.

As the conflict wrought a humanitarian crisis, mutual sniping about responsibility for economic woes in northern Yemeni lands that they together rule peaked on Wednesday when the capital erupted in gunbattles between their partisans.

Saleh had seemed unshakeable in one of the world’s poorest and unstable countries. He managed to play his enemies off against each other as tribal warfare, separatist movements and Islamist militants destabilised Yemen.

He survived a bomb attack in his palace mosque in 2011 which killed senior aides and disfigured him. As other leaders were toppled by the Arab Spring uprisings, he found a way to retire peacefully to his villa in the capital and plot a comeback.

Despite being forced to step down in 2012 under a Gulf-brokered transition plan following protests against his rule, Saleh won immunity in the deal and remained a powerful political player.

The ever-nimble Saleh was a pivotal figure in the war, which has killed at least 10,000 people, displaced 2 million from their homes, led to widespread hunger and a cholera epidemic.

Saleh became the ruler of North Yemen in 1978 at a time when the south was a separate, communist state, and led the unified country after the two states merged in 1990.

Opponents often complained that Yemen under Saleh failed to meet the basic needs of the country’s people, where two of every three live on less than $2 per day.

Saleh managed to keep Western and Arab powers on his side, styling himself as a key ally of the United States in its war on terrorism. He received tens of millions of dollars in US military aid for units commanded by his relatives.

After the September 11, 2001 attacks against US cities, Yemen came onto Washington’s radar as a source of foot soldiers for Osama bin Laden’s al Qaeda network. Bin Laden was born in Saudi Arabia though his family came from Yemen’s Hadramaut region.

Saleh cooperated with US authorities as the CIA stepped up a campaign of drone strikes against key al Qaeda figures, which also led to scores of civilian deaths.

Born in 1942 near Sanaa, he received only limited education before joining the military as a non-commissioned officer.

His first break came when President Ahmed al-Ghashmi, who came from the same Hashed tribe as Saleh, appointed him military governor of Taiz, North Yemen’s second city. When Ghashmi was killed by a bomb in 1978, Saleh replaced him.

In 1990, the collapse of the Soviet Union helped propel North Yemen under Saleh and the socialist South Yemen state into a unification.

Saleh angered Gulf Arab allies by staying close to Saddam Hussein during the 1990-91 Iraqi occupation of Kuwait, leading to the expulsion of up to 1 million Yemenis from Saudi Arabia.

But he then won plaudits from Western powers for carrying out economic reforms drawn up by the International Monetary Fund and World Bank, and made efforts to attract foreign investors.

He swept to victory when southerners tried to secede from united Yemen in 1994 and drew closer to Saudi Arabia, which he allowed to spread its radical Wahhabi form of Sunni Islam.

Saleh’s son, Ahmed Ali, lives under house arrest in the United Arab Emirates, where he once served as ambassador before it joined ally Saudi Arabia to make war on the Houthi-Saleh alliance.

Ahmed Ali, a powerful former military commander whom his father appeared to be grooming to succeed him, may the family’s last chance to win back influence.