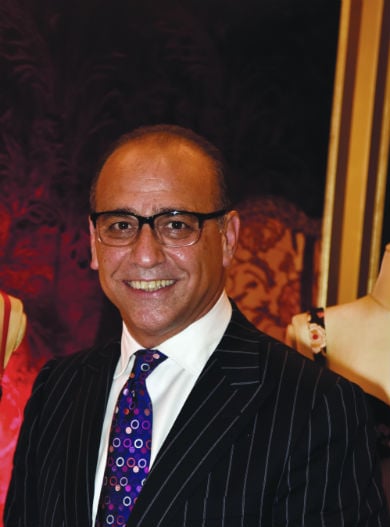 The cigar lounge on the 13th floor of the Address Downtown Dubai seems like a fitting venue for an interview with a businessman known for his straight talking.

Retail entrepreneur Theo Paphitis, famous in the UK for his nine years on television’s investment X Factor, Dragons’ Den lives up to his reputation almost immediately.

“You look like you’ve done the graveyard shift,” he tells me before we shake hands on a Thursday afternoon closing a particularly busy week at Gulf Business.

A star back home for grilling would-be entrepreneurs about their products, now the tables are turned, with my initial questions focusing on the impact he thinks the show has had on his reputation as a businessman.

“You boost your reputation through your achievements in life, and Dragons’ Den is a television show. But it certainly means I’m a lot more well known,” he answers carefully. Yet there have also been advantages. “You get to open most doors and people will talk to you. So it has other very positive effects.”

One door that has opened for Paphitis this year is the UAE, where his affordable luxury brand Boux Avenue already has quite a presence.

The company, which he launched in 2011, is turning its eyes to international expansion, with the Emirates one of its first stops following an approach from Al Ghurair Retail.

“I’ve always believed that if somebody came to my backyard and tried to compete with me, I would kick their butt,” he says frankly.

“Which is why when we come to growing internationally, we’ve done it with partners, who are specialists in their own area and they’ve got the local knowledge.”

“Marina Mall for instance, is an ideal place for us to be as well. We’d like to be Dubai Mall and Mall of the Emirates, but finding the right site in those places is not easy. In fact, it’s quite difficult to get in.”

Speaking about his overall plans for Boux, Paphitis is keen to emphasise that he is looking beyond the GCC as well.

“The Middle East is going to be a very big area for us, and obviously not just the Gulf States,” he says.

Elsewhere in the region, the brand has expanded to Libya with a second store coming, while it now also has branches in Iceland, Bulgaria, Malta, Gibraltar and a partnership in Asia. Each is based on the Boux concept with ‘easy to find’ size drawers, personal bra fitting concierge service and fitting suites as seen in the UK.

When pressed on where Boux will head to next in the Middle East – having revealed plans for around 29 stores – the dragon eventually opens up. “If I was betting man… pre-empting things, probably Saudi [Arabia] I would have thought.”

But is the self-described ‘shopkeeper’, with other brands in his portfolio including stationer Ryman and home ware store Robert Dyas, content with just bringing lingerie to the region?

“We don’t know. We’ll wait and see about that,” he responds. “But never say never.”