Command The Skies: Flying An A380 Simulator - Gulf Business 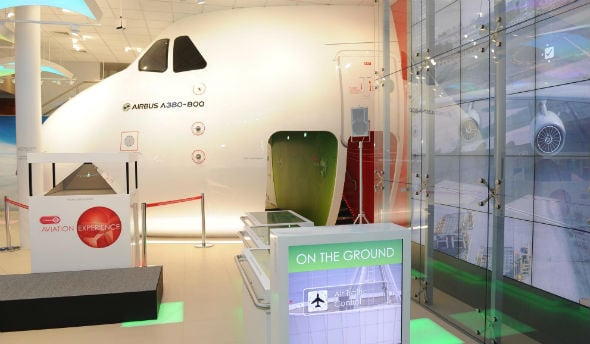 “Let’s try landing in a storm now,” says Chris, our A380 simulator instructor, which seems a bit foolhardy as we struggled to touch down twice on the Dubai runway in broad daylight.

The six-year-old doesn’t look too fazed – clearly he’s part of the anything’s-possible-double-decker aircraft generation and yet to have his enthusiasm quashed by meteorological concerns or physics textbooks.

I wonder what aviation must have been like in 1977, at a comparable age. Not a great year as it happens, as two Boeing 747s collided on Tenerife Airport, claiming 583 lives.

Aviation was still an experience then in every sense. Thankfully comfort, services and safety have improved immeasurably in the last 36 years, as a glance at all the gadgetry inside this novel attraction testifies.

This Dhs23 million (£4 million) facility, which opened in July, is testament to the extraordinary changes in flight in the last five years, when you consider Emirates’ A380 fleet has grown from one to 35 aircraft during this period and it’s flown 18 million passengers worldwide to 21 destinations. It wasn’t that long ago that an A380 was a novelty and now it’s commonplace.

Emirates has more than played its part in ensuring that transition, operating the world’s largest A380 fleet and world’s first dedicated A380 concourse (A) at Dubai international. Its network keeps growing with Brisbane (October 1), Los Angeles (December 2), Mauritius (December 16) and Zurich (January 1) among the next to come on stream.

On entering, your eye is drawn right to a large HD screen showing a parked A380 in ‘fast-forward’ mode, a reminder of all the trucking comings and goings when the aircraft is parked, often obscured from passenger view. It takes 60 people to turn it around inside 105 minutes.

Opposite is an electronic display outlining how a jet engine works and you can test yourself with efficiency, lift and drag, and behind is a
replica of the engine built in 160,000 lego bricks.

My third landing wasn’t too bad but we’d best not dwell on the storm.

Thereafter, visitors can scan their wristband on screens in a section resembling an economy cabin and learn more about ‘in flight’, ‘cabin crew’ and ‘the effects of flying’. Crew take you on a typical flight routine and remind us all that they’re principally there not to serve us chicken or fish, but for our own safety.

I enjoyed the tech section, and although most of us may have some grasp of satellites, the clear graphics show you how the communication works and content arrives at your seat; you may not be aware of the handy gizmo, the picocell, which provides the radio interface with your mobile.

The A380 nose cone dominates the area and beneath is a surround cinema in which you can follow your bag on a journey to the aircraft after check in.

You walk upstairs to the ‘red zone’ to the four simulators where alongside the A380s, you can also fly a Boeing 777. The most obvious difference is the latter’s steering wheel, which we found marginally easier to work than the joystick, although novices are in for a hectic ride once you factor in the rudders, alarms, screens and landing gear.

The most common mistake is pulling too hard on the controls – certainly when you’re teaching children(!) – but most of the key age group (16 to 35s) should get the hang of it after a while. My third landing wasn’t too bad but we’d best not dwell on the storm.

Steve Catherall, aviation experience manager, said: “The simulator is a beginner level, it’s certainly better than your computer at home but it’s not pilot training standard – the software is built in to go up to that, but then most people would not move the plane. This is very forgiving, based at Heathrow and Dubai, and you can do multiple landings and take-offs.

We’ve had educational groups through already, as it fits a number of curriculum items with students studying travel and tourism, and science modules as well. We can accommodate 120 people an hour, in terms of everyone using everything.”

If I was to be picky, I think the site could be larger, in keeping with the A380s stature. Perhaps more could have been made on the history and evolution of flight. But overall it’s a pleasant way to spend an hour or two, and affordable at £3 for adults and £1.50 for children (although a 30-minute simulator ride costs £45).

The experience rounds off with a shop selling Emirates items and café with outdoor seating, in the shadow of the Emirates Air Line cable car, which itself offers striking panoramic views over East London.

NB. Figures refer to items loaded from Dubai since Emirates’ first A380 flight.