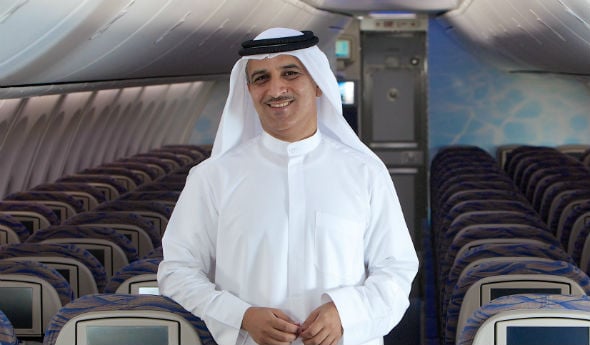 There is plenty of untapped demand for mid-range travel from Dubai’s tourism hub despite the massive capacity at the airport filling up, flydubai’s chief executive told Reuters after the budget carrier signed a deal for 100 Boeing 737 MAX planes.

“There are not enough flights in the region compared to places likes Europe, but there is demand,” Ghaith Al Ghaith, CEO of flydubai, said during an interview on board one of its Boeing 737s on display at the Dubai Airshow.

The carrier has launched flights to 65 destinations in four and a half years, creating 46 new routes previously unserved from Dubai. It started operations following an initial order of 50 Boeing 737-800s, 17 of which are yet to be delivered. Deliveries for the 100 Boeing 737-MAX jets will begin in 2017.

During 2013 alone, it launched 15 new destinations.

Flydubai started operations out of Dubai International Airport’s Terminal 2, along with several other small and budget carriers. It’s expansion, however, has pushed competing carriers elsewhere and Terminal 2 is now a Flydubai-only terminal.

In October, the carrier launched business class, a bid to offer a product usually reserved for full-service airlines.

The expansion has not been detrimental to other carriers, though, according to Al Ghaith.

“Of our 46 destinations, there were no options to fly in business class. There was a gap in the service,” he said. “The market is maturing, but I don’t think it’s saturating.”

Al Ghaith said demand is increasing as cities in the region continue to develop, while more can be created as new connections are launched.

Within a 5.5-hour radius, there are countries where the carrier would launch flights to if bilateral agreements with the United Arab Emirates (UAE) allowed. “There are not enough flights in the agreement with Iran to launch flights or to increase frequency in Pakistan and India,” Al Ghaith said.

The airline will look for financing for the new aircraft as it takes deliveries. Options include sale and lease-back, direct bank loans as well as bonds – “all is possible.”

Earlier this month, it signed financing deals worth $228 million with a combination of international and local banks for six Boeing 737-800 aircraft being delivered in 2013-2014.