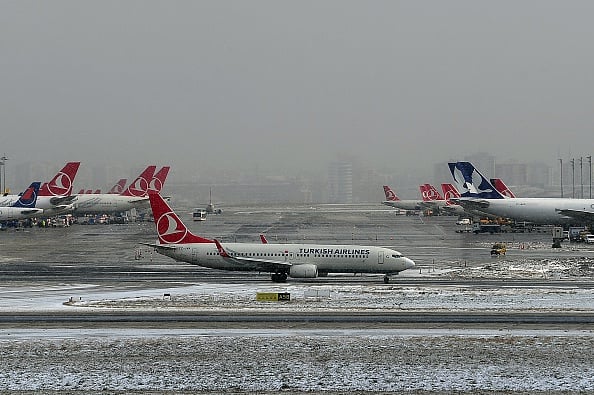 Some commuters in the city of 15 million had to walk to work after as much as 60 cm (24 inches) of snow fell in two days in parts of Istanbul.

The storm also stranded members of the Besiktas football team at the airport. The Istanbul side is scheduled to play Liverpool in England on Thursday.

According to CNN Turk, the team will depart from Istanbul’s Sabiha Gokcen Airport at 1300 GMT instead of the planned morning flight from Ataturk Airport, CNN Turk said.

Discount carrier Pegasus also called off some flights at its hub at Sabiha Gokcen.

The Bosphorus, which divides Istanbul into Asian and European districts, was shut in both directions at 8:10 a.m. (0610 GMT).

At least 13 ships were waiting to enter the strait at both ends and were now scheduled to make the voyage on Thursday, shipping agent GAC said. The Dardanelles at the opposite end of the Sea of Marmara remained opened, it said.

Maritime authorities regularly shut the Bosphorus, the only navigable waterway for Russian commodities, due to reduced visibility in winter months, which raises cargo costs. Some 10,000 tankers carry 150 million tonnes of petroleum products through the narrow, winding strait each year.

Icy roads had led to more than 800 traffic accidents since late on Tuesday, the mayor’s office said.