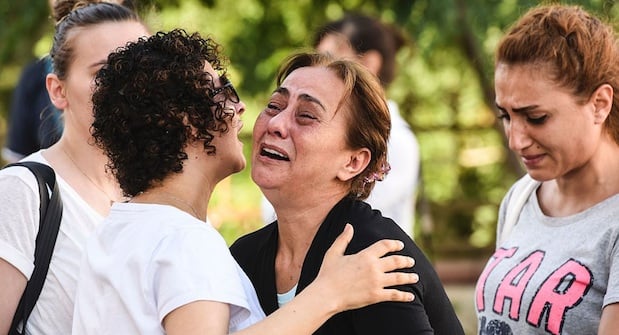 Turkey pointed the finger at ISIL on Wednesday for a triple suicide bombing and gun attack that killed 42 people at Istanbul’s main airport, and President Tayyip Erdogan called it a turning point in the global fight against terrorism.

In the deadliest of a series of suicide bombings this year in Turkey, the attackers struck the busy airport, a symbol of Istanbul’s role as the Muslim world’s most open and cosmopolitan city, a crossroads between Europe and Asia.

Three bombers opened fire to create panic outside the airport on Tuesday night, before two of them got inside and blew themselves up. Up to 239 people were wounded, officials said, giving a full account of the bloodshed.

Prime Minister Binali Yildirim said the attackers shot at random to overcome security checks at the international terminal of Ataturk airport. One blew himself up in the departures hall, a second in arrivals, and the third outside.

Authorities said on Wednesday 41 were killed. The figure is now believed to be 42 after Turkish state-run news agency Anadolu reported an injured woman had died. Officials said 13 foreigners were killed, including five Saudis, two Iraqis and citizens from China, Jordan, Tunisia, Uzbekistan, Iran and Ukraine.

“Our thoughts on those responsible for the attack lean towards ISIL,” Yildirim told a news conference in the capital Ankara, adding that investigations should be completed in the coming days and the identities of the bombers revealed.

A U.S. official, speaking on condition of anonymity on Wednesday, said U.S. intelligence agencies do not have sufficient evidence to conclude definitively that ISIL was responsible for the attack.

But the official added that Turkish authorities taking the lead in the investigation may have evidence the United States has not seen.

Turkey is part of a U.S.-led military coalition against ISIL and home to around three million refugees from the five-year civil war in neighbouring Syria.

ISIL has established a self-declared caliphate on swathes of both Syria and Iraq and declared war on all non-Muslims and all Muslims who do not accept its ultra-hardline vision of Sunni Islam. It has claimed responsibility for similar bombing and gun attacks in Belgium and France in the past year.

Erdogan, whose government has taken steps this week to improve relations with Israel and Russia in part to strengthen its hand in fighting against militants, said the attack should serve as a turning point in the global battle against terrorism, which he said had “no regard for faith or values”.

Obama, at a North American summit in Ottawa, Canada, said the United States has offered all assistance available to Turkey and pledged to work with Ankara to fight terrorism.

“We’re still learning all the facts, but we know this is part of our broader shared fight against terrorist networks,” he told a news conference.

A day after the attack, broken ceiling panels littered the kerb outside the arrivals section of the international terminal. Plates of glass had shattered, exposing the inside of the building, and electric cables dangled from the ceiling.

“There were little babies crying, people shouting, broken glass and blood all over the floor. It was very crowded, there was chaos. It was traumatic,” said Diana Eltner, 29, a Swiss psychologist who was travelling from Zurich to Vietnam but had been diverted to Istanbul after she missed a connection.

Paul Roos, 77, a South African tourist on his way home, said he saw one of the attackers “randomly shooting” in the departures hall from about 50 metres (55 yards) away.

“He was wearing all black. His face was not masked … We ducked behind a counter but I stood up and watched him. Two explosions went off shortly after one another. By that time he had stopped shooting,” Roos told Reuters.

“He turned around and started coming towards us. He was holding his gun inside his jacket. He looked around anxiously to see if anyone was going to stop him and then went down the escalator … We heard some more gunfire and then another explosion, and then it was over.”

One attacker opened fire in the departures hall with an automatic rifle, sending passengers diving for cover and trying to flee, witnesses said. Two other explosions hit the arrivals floor below, one of them just outside the building.

Video footage showed one attacker inside the terminal being shot, apparently by a police officer, before falling to the ground as people scattered. The attacker then blew himself up about 20 seconds later.

“It’s a jigsaw puzzle … The authorities are going through CCTV footage, witness statements,” a Turkish official said of the investigation.

The Dogan news agency said autopsies on the three bombers, whose torsos were ripped apart, had been completed and that they may have been foreign nationals. It did not cite its sources.

No group had claimed responsibility, more than a day after the attack, which began around 9:50 p.m. (1850 GMT) on Tuesday.

Istanbul’s position bridging Europe and Asia has made Ataturk airport, Turkey’s largest, a major transit hub for passengers across the world. The Istanbul governor’s office said 109 of the 239 people hospitalised had since been discharged, but the health minister said 41 were still in intensive care.

Delayed travellers were sleeping on floors at the airport, a Reuters witness said, as some passengers and airport staff cried and hugged each other. Police in kevlar vests with automatic weapons prowled the kerbside as a handful of travellers and Turkish Airlines crew trickled in.

The national carrier said it had cancelled 340 flights although its departures resumed after 8:00 am (0500 GMT).

The attack bore similarities to a suicide bombing by ISIL militants at Brussels airport in March that killed 16 people. A coordinated attack also targeted a rush-hour metro train, killing a further 16 people in the Belgian capital.

“In Istanbul they used a combination of the methods employed in Paris and Brussels. They planned a murder that would maximise fear and loss of life,” said Suleyman Ozeren, a terrorism expert at the Ankara-based Global Policy and Strategy Institute.

Turkey needs to work harder on “preventative intelligence” to stop militants being radicalised in the first place, he said.

The European airports association ACI Europe said airport security had been stepped up across the continent after the Brussels attacks, but said many of the fatalities in Istanbul came as people queued for security checks at the entrance.

“We must face the reality that when dealing with a terror threat based on suicide bombing, no security measures can ensure 100 percent protection,” it said.

The two U.S. officials said the Istanbul bombing was more typical of Islamic State than of Kurdish militant groups which have also carried out recent attacks in Turkey, but usually strike at official government targets.

Yildirim said it was significant that the attack took place when Turkey was having successes in fighting terrorist groups and mending ties with some of its international partners.

Turkey announced the restoration of diplomatic ties with Israel on Monday after a six-year rupture and has been trying to restore relations with Russia, a major backer of Syrian President Bashar al-Assad.

“While some see it as a possible knee-jerk reaction to the rapprochement with Israel and Russia, given the preparation involved I think it is part of a general response to Turkey’s intensification of security measures along the Turkey-Syria border,” said Ege Seckin, political analyst at IHS Country Risk in London.