Turbograph Perpetual Honeygold “Homage to F.A. Lange” (pictured above)
It’s a tough year for watchmakers to market their concept of luxury watches – but Saxonian watchmaker F.A. Lange didn’t have it easy either when he started his company in the impoverished mining town of Glashütte in 1845 with a team of 15 apprentices. Now, 175 years on, for a watchmaking house whose reputation has been forged in the core of a furnace, it won’t have much trouble in drawing attention to the Turbograph Perpetual in Honeygold.

The 18-carat Honeygold dial has been given a black rhodium treatment, with the dial consisting of five layers including the dial ring, the sub-dials and main dial. The L133.1 movement meanwhile comprises of five complications: a tourbillon, perpetual calendar, fusée-and-chain mechanism, a chronograph and a rattrapante function. All of these are housed within a 43mm case, a fitting anniversary tribute to a watchmaking titan who altered not just the trajectory of a nondescript region in Germany, but also revived the country’s artisanal crafts.

Roger Dubuis isn’t a brand that attempts to mask or downplay its chutzpah – and it has little reason to do so with it being the only watchmaker to have 100 per cent of its timepieces Hallmark of Geneva-certified.

This year’s Excalibur Superbia was conceived in collaboration with Japanese interior design specialist Kaz Shirane, and features 600 white diamonds and blue sapphires. The case of this 45mm watch alone has 238 tetrahedron-cut stones. That each of those stones meet every other stone in six-seven places made the task of setting it on the case alone a 420-hour job.

But don’t let those bright stones of this one-off timepiece distract from the fact that this watch also features an all-new double-flying tourbillon movement, RD108SQ, with a 72-hour power reserve. As you peer through the open-worked dial, try and find the words “Memento mori” secretly inscribed somewhere on that movement. Translated from Latin, it means: “Remember you must die.” With this watch, it is beyond doubt that the beholder will have lived more than a full life. 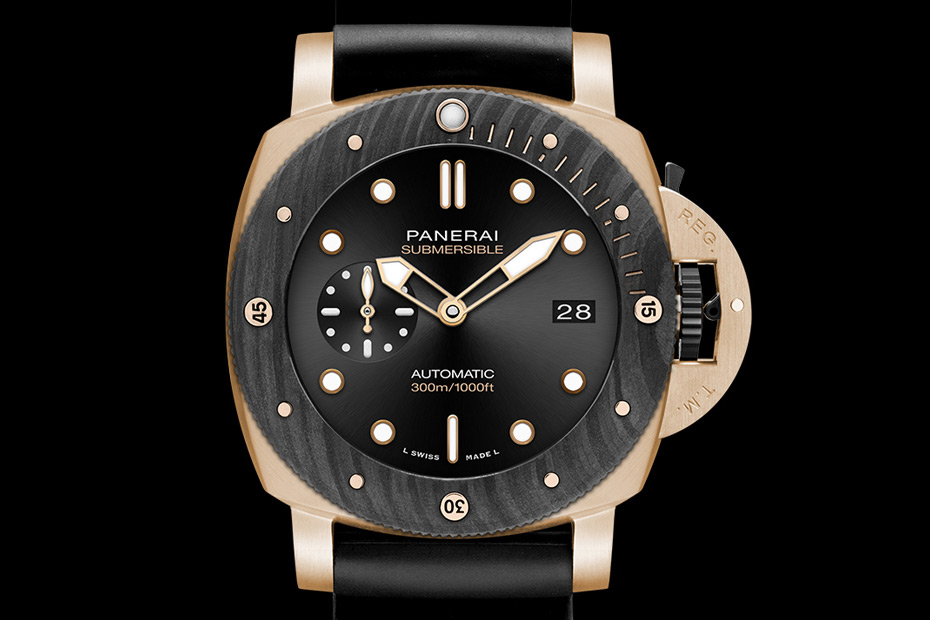 Carbon, gold, titanium and platinum – the watchmaker brings all of these materials together in this 44mm timepiece with an unmistakable silhouette. The case is made from goldtech, a proprietary material which is an alloy of 75 per cent gold and 24 per cent copper, along with 0.5 per cent of platinum – a material from Panerai’s experimental Laboratorio di Idee department.

The bezel, the crown and the crown bridge lever are made from carbotech, another proprietary material that consists of carbon sheets layered and fused. The dodecagonal screwed titanium caseback protects the in-house P.900 calibre with a three-day power reserve at depths of up to 300 metres. Visible on the caseback is an image of the manned torpedo missions with navy divers astride it – Panerai was, after all, a brand that was exclusively available to the military until the nineties when it became available to civilians.

Every year, the Schaffhausen watchmaker overhauls one of its six families of timepieces – this is the year of the Portugieser. In April, IWC released a tourbillon retrograde chronograph, a perpetual calendar and even a time-only 40mm automatic model. But it wasn’t until Watches & Wonders Shanghai that it showcased this Portugieser Chronograph with a stainless-steel bracelet.

The chronograph made its way into IWC’s Portugieser collection over two decades ago, but for the first time, it is now offered with a stainless-steel bracelet.

The new 41mm timepiece, which is fitted with a stainless-steel case, silverplated dial and blue hands, features an automatic winding IWC-manufactured 69355 calibre with a column-wheel chronograph, which has a power reserve of 46 hours.

Recently, IWC launched a virtual boutique experience for customers in the Middle East which is based on its concept at The Galleria Al Maryah Island shopping centre in Abu Dhabi. You can click on displays, compare products and book viewing appointments too.

From resort wear, to tuxedo to office smart casual – typically, you’d rely on three different watches, each with a different strap to match the occasion. But bringing in versatility and allowing you to toggle between three different looks is this new Overseas Self-winding in pink gold which comes with three interchangeable straps: blue rubber, blue alligator leather and a pink gold bracelet.

Like the 222, it too features a slim case, thanks to a 4.7mm thin automatic winding 5100 movement. Just beyond the 22k oscillating weight in the caseback, you’ll catch sight of that exceptional finishing on the movement which has earned this watch a Hallmark of Geneva certification.