The Civil Defense directorate in Jazan region received a report about the “fall of a military projectile launched by the Iran-backed Houthi terrorist militia from inside Yemen towards one of the border villages”, the Saudi Press Agency (SPA) reported, citing spokesman Colonel Mohammed bin Yahiya Al-Ghamdi. 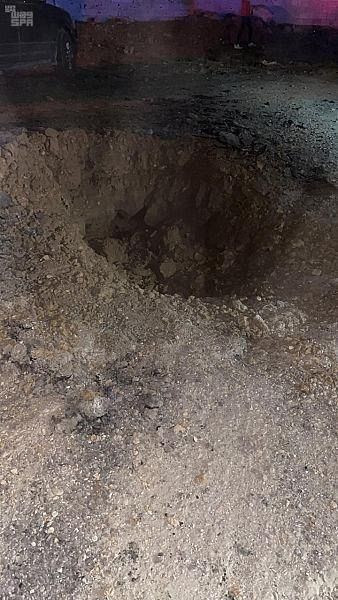 He said the military projectile fell on a public street, with the flying shrapnel resulting in the injury of five civilians, including three Saudi citizens and two Yemeni nationals.

They suffered moderate injuries and were transferred to the hospital for medical care, SPA stated.

“The procedures adopted in such cases have been immediately implemented”, Al-Ghamdi said.

The kingdom has been facing numerous Houthi drone and missile attacks in recent weeks.

No casualties were recorded, but some of the scattered debris resulted in material damage to one house.

Last month, an attack on the Abha airport resulted in a civilian plane catching fire, although there were no reports of any injuries.

“We are taking the necessary measures to protect civilians from the threats of the Houthis,” Al-Malki said at the time.