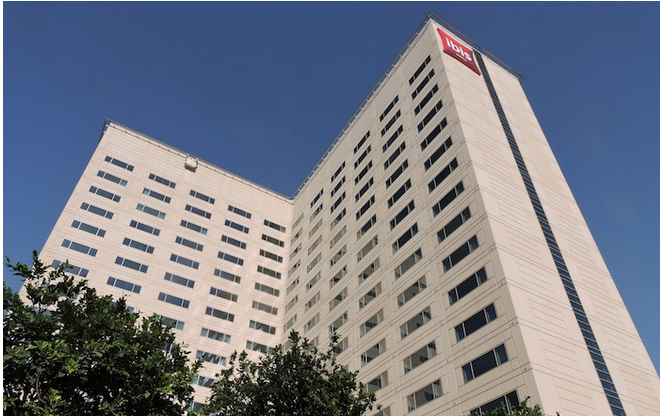 French operator Accor recently soft opened ibis One Central, its third property – and second ibis – in the Dubai International Convention and Exhibition Centre vicinity, swelling its overall inventory to 1,210 rooms. At 588 rooms, it is the largest ibis in the region and more than twice the size of the existing 210-room ibis World Trade Centre Dubai. Delegates are a small walk away from the halls. Around half the rooms are open now and the official launch will be on March 9.

The lobby is bright and uncluttered, except for a central wrap-around seating area which has power points for connection-hungry executives (monitors are also available nearby and wifi is free throughout). Six lifts should ensure you’re not waiting long to go up or down. The wide entrance will appeal to valet car-arriving guests and adjacent is an office block

No complicated room categories here – you have a choice of twin or double (the sizes are the same). It is modelled on the three-star ibis Styles, which means it offers more services than the neighbouring ibis (such as meeting rooms and gym). Rooms have tea and coffee making facilities and Samsung TVs, and a drinks/snack machine is a welcome touch in the corridors. Visiting business travellers can enjoy Burj Khalifa views from one side, and the small gym.

The all-day-dining, Asian-themed WOK & Co, on the lobby level, has six attractive leather-seated booths either side which are ideal for private meetings over lunch or dinner (buffet), and guests can also choose from a range of other single, couple and group seating options (and a bar is towards the back). A Cuban bar opposite will open in April.

A large shaded terrace should be popular in winter months

Five meeting rooms with break-out areas are available (three at 64sqm, and one large room can be split into two). Abstract art brighten up the walls. Rates were high during our visit (Dhs 1,660), primarily in response to high demand for Arab Health. Aside from convention business, Accor hopes to attract Arab leisure business on weekends given its city centre location.