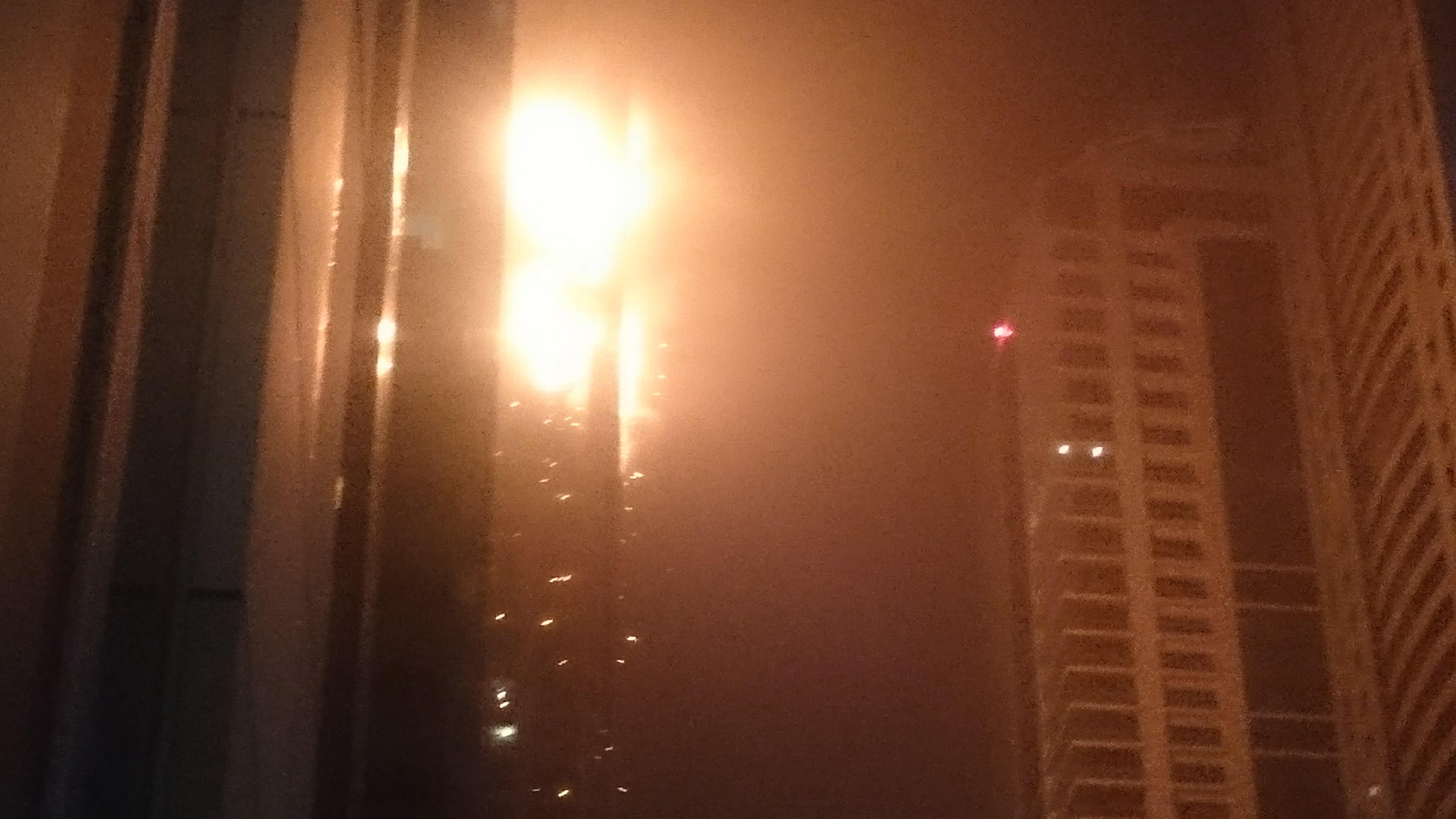 A massive fire ripped through one of Dubai’s tallest residential towers early this Saturday, as per eye witness reports.

Civil defence, police and fire-fighting crews were on site, having cordoned off the surrounding area and also, according to some reports, evacuated surrounding buildings. Fire-fighting activity could be seen at the very top of the tower though it could not be verified if there were responders on the affected floors.

Casualties, if any, could not be confirmed at the time of publishing.

Windy and dusty conditions, which plagued Dubai all through Friday, also made things tough for responders. Debris from the fire could be seen flying from the building into surrounding areas.

At one point, a huge piece of debris could be seen landing in the pool area of Princess Tower, a building that faces the Torch and is the world’s tallest residential tower. However, fire crews were in place to extinguish the debris.

The fire was brought under control though it had spread to the non-sea side of The Marina Torch as well. At least 20-25 floors are gutted on the seaboard side of the building. Only a few floors look completely gutted at the time. Fire-fighting activity raged on at the top most floors at the time of this update.

The fire at The Marina Torch is now visibly under control. Civil Defence and Police officials were tight-lipped and not disclosing any details about casualties.

One resident, who refused to disclose his name, said that he did not think there were any casualties. Adding that he lived a few floors below where the fire started, he added that there were a “few hundred” people with him evacuating through the building’s emergency stairs.

The fire is said to have started somewhere above the 50th floor and looked to have right at least 70-75 floors on the seaboard-side and there were a few floors affected on the non-seaboard side.

It must be noted that only a few floors look completely gutted.

The area is still cordoned off and evacuated resident from The Torch and other surrounding buildings are yet to go back to their homes.

The cordon in the area has been lifted and residents from The Torch and its lower floors, as well as surrounding buildings, are heading back to their building.

A medical response team on site told this reporter that no fatalities are being reported as of yet. However, some residents are being treated for anxiety and smoke inhalation related issues.

According to residents of The Torch, the fire started around the 57th floor. The fire looked to have reached all the way to the 79th floor on the seaboard side.

Authorities are yet to disclose what caused the fire.