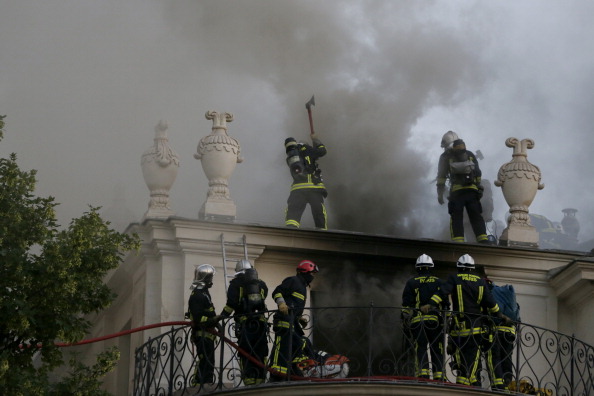 A fire caused serious damage to a 17th century palace in central Paris early on Wednesday, burning away a huge portion of its rooftop just as a costly renovation was near completion.

The Qatari-owned Hotel Lambert on the Ile Saint-Louis island on the River Seine was one of the most well-preserved private mansions in Paris. Its architect Louis Le Vau also designed the Palace of Versailles.

“This is a setback for our historical heritage,” Paris Mayor Bernard Delanoe told journalists at the scene.

Firefighters rushed to the mansion at around 1 a.m., struggling for six hours to contain the blaze, which broke out in a hard-to-access area below the rooftop for reasons as yet unknown. No one was injured.

By the time the fire was put out, 650 square metres (7,000 square feet) of the roof had gone, part of a central staircase and some facade masonry had collapsed and rooms had been damaged by water and smoke, fire brigade spokesman Pascal Le Testu said.

Art historians were evaluating the damage to works of art, which firefighters had tried to protect, Le Testu said.

They managed to prevent the blaze from spreading to surrounding buildings, which were evacuated as a precaution.

The damage came as workers were putting final touches to a renovation agreed between Paris authorities and the owner, a brother of Hamad bin Khalifa al-Thani, the former emir of Qatar.

Plans to renovate the mansion were only finalised after a lengthy legal battle between al-Thani, who bought it in 2007 for a price that media estimated was up to 80 million euros ($102 million), and groups defending Paris monuments.

Opponents to the original renovation scheme objected to plans to build an underground garage, install an elevator and new bathrooms as well as redesigning its garden.

The mansion was occupied for 150 years by the Polish Czartoryski family, who sold it the French branch of the Rothschild family in 1975.