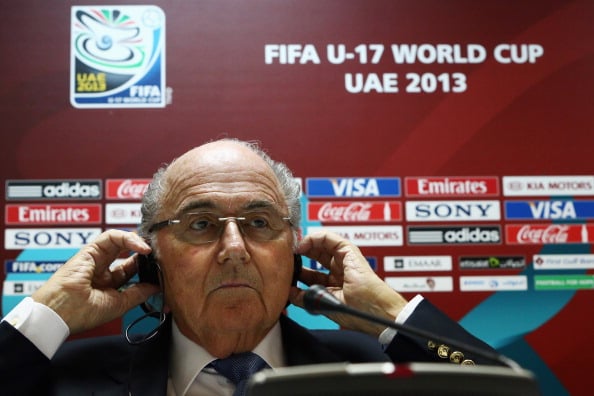 FIFA has ruled out any possibility that Qatar could co-host the 2022 World Cup with neighbouring countries, Sepp Blatter said on Saturday.

The FIFA president added that soccer’s governing body had discarded a January-February World Cup in 2022 out of respect for the Olympic family and said Qatar was “reacting” to criticism of its treatment of migrant workers.

“The decision of the FIFA is to play in one country and that will be in Qatar,” Blatter told a news conference after meeting the emir of Qatar, Sheikh Tamim bin Hamad al-Thani.

He denied that he had suggested that co-hosting was a possibility, implying that it was a misunderstanding that arose during a news conference in Abu Dhabi on Friday.

“I was just touring a little bit here, I was in Iran and I was in United Arab Emirates and it came up, the question came up, ‘Can we share the World Cup with Qatar?’ I just took the questions, but I did not answer,” he added.

“I just want to tell you that when we took the decision for the World Cup 2002 when we played in two countries with difficulties, it was (South) Korea and Japan.

“We have decided to never go in two countries, even less so to three, if one country is able to do so (stage the tournament).”

FIFA last month launched a consultation process to decide whether the tournament, initially scheduled to be held in the traditional June-July slot, should be moved to a cooler time of a year.

On Friday, Blatter ruled out a January-February World Cup and said the only alternative to a summer tournament would be November-December in 2022.

“In January, February, these are the Olympic Winter Games,” he said.

“It’s out of the respect to the Olympic organisation, the Olympic family..secondly, we have together with the Olympic, the IOC, practically the same media, television and marketing partners and we cannot have two competitions in the same time.”

“They are aware of the problem but they are already reacting to that,” he said. “The labour laws are in the process of being amended,” said Blatter, who did not give further details of what the amendments entailed.

Britain’s Guardian newspaper reported recently that dozens of Nepali workers have died during the summer in Qatar and labourers were not given sufficient food and water, were housed in cramped and unhygienic conditions and had their passports confiscated.

“I would like to say again that we are not responsible for the (labour) laws, but we are happy to see that they will be amended,” Blatter said.

He later added on Twitter: “I really encourage people to see these efforts to improve working conditions themselves, before forming opinions.”