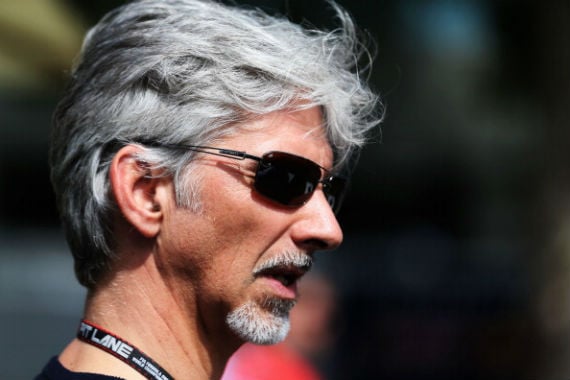 Former world champion Damon Hill has called on Formula One’s governing body, the FIA, to take a stance and address concerns within the sport about next week’s Bahrain Grand Prix.

Hill, Britain’s 1996 champion who is now a television pundit, supported last year’s race after initially urging the authorities to reconsider holding it while the country was in the grip of civil unrest and violent protest.

Hill, speaking ahead of this weekend’s Chinese Grand Prix at a briefing in London organised by British opposition Labour parliamentarian Richard Burden, told F1 reporters he still had reservations and was concerned for the sport’s reputation.

“The question really is whether or not F1 going to Bahrain is actually going to be…furthering brutal repression of people by being an endorsement of the way in which repression has been meted out,” he said.

“(Last year) I took the view that the sport and the governing body of the sport should be ensuring that they are not hijacked for the wrong reasons. I’m not entirely sure that they’ve cleared that point, to be honest.”

The grand prix was cancelled in 2011 following a bloody crackdown on a pro-democracy uprising but went ahead last year, despite calls by activists in Bahrain and campaigners abroad for teams not to race, while police and youths staged nightly clashes with teargas and petrol bombs.

Formula One supremo Bernie Ecclestone, who will be in Bahrain for the fourth race of the season, told Reuters last week that he had no concerns about it becoming a target for protesters.

Hill felt Jean Todt, the French president of the Paris-based International Automobile Federation, was mistaken if he believed the best approach was to say nothing.

“That is a mistake because actually he is being political because he’s being used, or sport is perceived as being used, by its engagement in the economy and the reputation of the country,” he said.

“He (Todt) has not said anything that has distanced the sport from things it would find distasteful and upsetting, which I believe everybody in the sport would actually like to do.

“I think the vast majority of the people in Formula One would like to say ‘we don’t want to come here to make things worse for people. We would like you to enjoy Formula One, we think Formula One’s got lots of positive things to offer but please don’t on our behalf round people up and brutalise them’.

“I don’t see that being political. That’s more ethical than political.”

Hill was speaking before a report by Human Rights Watch on Wednesday that police in Bahrain had arrested 20 opposition activists in towns near the Sakhir Formula One circuit.

The Bahrain government, which resumed reconciliation talks with the opposition in February for the first time since 2011, denied any arrests had taken place.

Last year’s race went ahead under the slogan ‘UniF1ed’ but was seen as a public relations setback for the government with television images of the unrest and heavy police presence broadcast around the world.

This season’s has the less controversial ‘Imagine Your Moment’ and organisers are hoping for a near-record turnout.

Burden, who last year opposed the race going ahead, asked why the FIA had not sought to attach conditions – “benchmarks and milestones” – to help gauge whether it had a positive impact on bringing the country together.

He said he still had concerns despite Todt, in correspondence, assuring him that the FIA believed everything was going to be fine.

“It’s their decision that they are going to go ahead. If that is the case, then I think what is vitally important is that they send out the right kind of messages around that decision,” added Burden.

“Perhaps the most vital is that they understand what the problem is. And that they do want to use F1 in the way they said they wanted to use it last year, to promote changes in the country. If that is going to happen, it has to be measurable in some ways.

“If they don’t do that, they won’t be contributing to a resolution of things in Bahrain and more importantly they won’t be doing anything in the long term for the reputation of F1.”