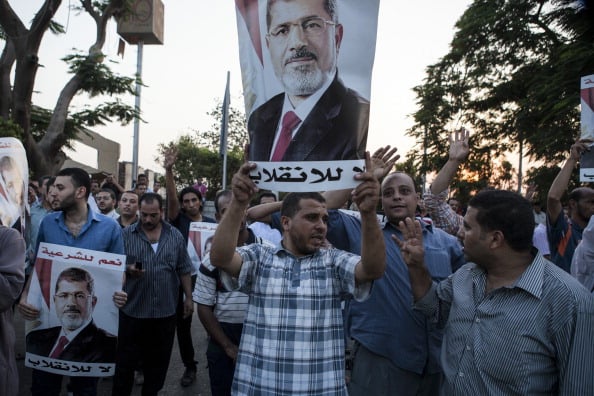 A climate of fear that kept Egyptians compliant during the 30-year rule of Hosni Mubarak is creeping back into daily life, less than three years after the revolt that toppled him.

“It is about the principle that we stood in line and voted freely for the first time and this happens,” whispered Mohamed, who declined to give his second name. “People who speak about justice now do not dare to say it out loud, in case people accuse them of being terrorists.”

While activists critical of the army-backed government are obvious targets for intimidation, now ordinary Egyptians also avoid the noisy, boisterous discussion of politics that was common between the fall of Mubarak and that of his Islamist successor on July 3.

From mass arrests of Muslim Brotherhood leaders to the re-appearance of plain clothes enforcers on the streets of Cairo, a chill wind is blowing down the Nile.

Many Egyptians lambasted Mursi’s Brotherhood for economic incompetence and trying to grab excessive power during his year in power. But now the language is much more serious: the government accuses the Brotherhood of “terrorism” as it tries to crush the movement by rounding up hundreds of leading members.

At least 900 people have been killed since security forces broke up two pro-Mursi camps on Aug. 14. Allies of the Brotherhood, Egypt’s oldest and best-organised Islamist organisation, put the toll at 1,400.

A muted public response to Wednesday’s court ruling that Mubarak should be released from jail has added to a sense that the authoritarian order is making a comeback, threatening the freedoms that were the main dividend of the uprising that began on Jan. 25, 2011.

Media are now dominated by those backing the army’s line that it removed Mursi in response to popular protests demanding his departure that began on June 30.

“I can sense, smell and very much tell that these are old Mubarak people coming to take their revenge on the Muslim Brotherhood,” said Khaled Dawoud, a liberal who backed Mursi’s overthrow but has since criticised the spread of violence.

“It is so obvious with the pro-Mubarak people who are filling the TV right now. They don’t even want to consider Jan. 25 a revolution. They say June 30 is the only revolution.”

The Brotherhood, which kept large protest camps going for six weeks in Cairo to demand Mursi’s reinstatement, is now struggling to get people out. There have been no major protests for days. The marches have fizzled out since Sunday when rumours spread that government snipers were posted on rooftops.

The authorities have tightened their grip with dawn-to-dusk curfews. The emergency rule that lasted throughout the Mubarak era is back, at least for a month. Police who melted away in the face of public anger in 2011 appear invigorated by the new political climate, paraded as heroes on state television.

As the authorities widen their net to include regional and lower-ranking Brotherhood members, other Islamist parties worry that their own members will be hauled in.

Younes Makhyoun, leader of the Nour Party which follows the puritanical Salafi approach to Islam, voiced concerned that the political security apparatus that once hunted religious groups and government critics will make a comeback.

Islamist movements, like any that tried to offer a serious alternative to Mubarak’s military-backed party, were outlawed for decades. Like the Brotherhood, they were among the biggest beneficiaries of the 2011 uprising that allowed them to set up political parties and campaign openly for the first time.

Now, their members face citizen’s arrests at the makeshift checkpoints that have sprung up around Egypt, manned by pro-government vigilantes. Some Egyptians recognise these as the pro-Mubarak “baltagiya”, or thugs, who clashed with protesters during the 18-day revolt that ousted the former leader.

“Thugs have attacked them in the street, then handed them over to the police stations, then accusations have been fabricated against them – that they had weapons or were taking part in acts of sabotage,” Makhyoun told Reuters.

“We need guarantees from the authorities to the Egyptian people: that the gains of the Jan. 25 revolution cannot be violated, especially in the field of freedoms, human rights, and freedom of expression.”

The crackdown on the Islamists has divided liberals in much the same way that it has polarised Egypt. Loath to endure Islamist rulers, elected or not, some liberals who joined the 2011 protests now side wholeheartedly with the army.

Egyptian state television has resumed its role as the mouthpiece of those in power. Channels emblazoned with banners reading “Egypt fighting terrorism” flicker on screens in Cairo’s street cafes, in bakeries and in barber shops.

A recent poll by the Arab American Institute suggested a huge majority of Egyptians had confidence in the military.

It is far from uncommon to hear Egyptians, whose economy was brought close to bankruptcy by persistent instability, hark back to Mubarak’s era as a time when they at least earned a living.

“The Brotherhood were a problem for this country. God has taken revenge on them,” said Haj Abdelfattah, 71, smoking his waterpipe as he sat on a plastic chair and sold overripe fruit by the road. “They acted for themselves, not Egypt.”

But some of the liberals who initially welcomed the army’s move against Mursi have been dismayed by the ensuing bloodshed. The army has promised fresh elections but critics fear they will pay a political price for their opposition.

Mohamed ElBaradei, a Nobel peace prize winner and the most prominent liberal to endorse Mursi’s overthrow, resigned as interim vice president early in the crackdown and left for Europe days later. He now faces a lawsuit raised by a private citizen who accuses him of “betrayal of trust”.

This points to the prospect of a new wave of politically-motivated suits. Under Mursi, Brotherhood supporters had brought a series of cases against opposition figures, in what critics called a form of political intimidation.

By contrast, Mubarak is close to being freed with charges ranging from corruption to complicity in the killing of protesters so far failing to stick.

“I have not been sent to trial but I am getting enough charges of treason and defecting and jumping off board, and this is discomfiting talk,” said Dawoud, who quit as spokesman for ElBaradei’s National Salvation Front as the death toll rose.

Like ElBaradei, Dawoud has become something of a pariah in the ranks of his former brothers-in-arms in Tamarud, the youth movement that led the protests against Mursi and welcomed the army’s intervention against him.

“Tamarud is finished … They issue statements that call on the army to do even more,” he said. “It is a major disappointment to me that some liberal and nationalist parties that had defended the goals of human rights and democracy… have suddenly decided to swallow this.”

The backlash is such that critical journalists and broadcasters have been silenced or forced off the air. Government officials have railed against the foreign press, accusing it of sympathising with the Brotherhood and underplaying attacks on churches and the deaths of police.

Some foreign correspondents say they have been beaten while out reporting or faced pressure from vigilantes accusing them of being spies.

Activists say their efforts to condemn the extensive nature of the arrests, or the deaths of 38 people in custody, have been met with accusations of political bias.

“There are fears or threats of arrest by loyalists of the former regime against the revolutionary youth and activists… The atmosphere of fear and terrorising of activists who speak out about anything – this is widespread,” said Mohamed Adel, media coordinator for the Egyptian Centre for Economic and Social Rights.

“Some big journalists… are being threatened and told you are either with us or with the enemy.”

Sitting in his shop, worried about getting home before curfew, Mohamed sees only dark days ahead for Egypt.

“The barrier of fear is returning. It is coming back stronger than before. The police were humiliated after the Jan. 25 revolution and they want to restore their authority… The excuse will be anti-terrorism, the same excuse Bashar al-Assad uses in Syria,” he said. “We’ll end up a jungle like Syria.”