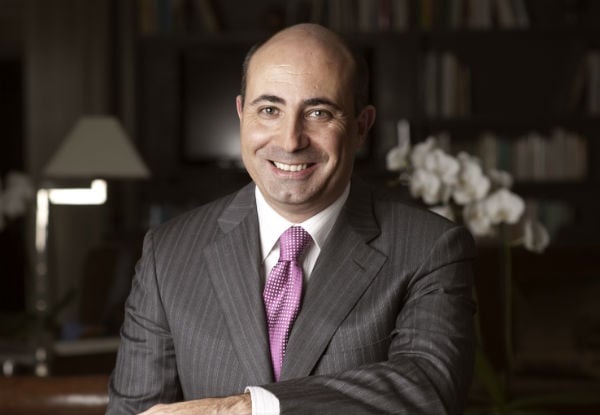 “The one tip I tell my friends, what I tell everybody, is you need to dress the way you like. When you buy a suit you need to think of yourself. You must be wearing a suit that complements your personality.”

Wise words from a very knowledgeable man; Francesco Pesci is the CEO of men’s luxury fashion brand Brioni, and therefore knows more than pretty much anybody else about what to look for when buying a suit.

“A suit is not a uniform, do not let others tell you what your suit should look like. Make your choice.”

Mr Pesci’s advice on tailoring comes during his visit to Dubai to oversee the opening of Brioni’s latest boutique store in Mall of the Emirates.

Renown, amongst other things, for dressing James Bond during the Pierce Brosnan era and on Daniel Craig’s first outing in Casino Royale, Brioni has entered into casual wear in recent years.

Pesci’s description to me of the evolution of the men’s suit jacket could be used as a metaphor to describe the brand’s development over recent times.

“The jacket is moving away from being part of the formal wardrobe to being a very strong component of the casual wardrobe instead.”

Though the new store is a sign of Brioni’s expansion in the Middle East, Pesci is clear that any new footsteps taken by the designer are executed with great care.

“There are other countries we are looking at, for instance Kuwait and we just opened a shop in Riyadh in Saudi Arabia. We have plans to expand in this region but we are doing so cautiously,” Pesci explained to me.

“The potential of this region is enormous but this region has always been effected by a little bit of instability. Dubai’s always been much more stable than other countries in the region. It is the strongest market for Brioni by far.”

The expansion may come as little surprise to any Brioni-watches who predicted the growth following Brioni’s takeover by PPR, the French luxury goods group almost 12 months ago.

PPR bought 100 per cent of the Milan designer in a deal believed to be worth around $300 million in equity.

Though unable to comment on the company’s third quarter results, Pesci describes the acquisition as “the best thing the company could do.”

“Personally I think it was a great thing for the company, probably the best thing that the company could do,” Pesci told me as we sat in a large, elegant fitting room to the side of the store.

“Since the takeover, the integration between Brioni and the PPR corporate structure is going extremely well and smoothly. The intention of PPR is to help Brioni to grow, not to deny what Brioni has been standing for in the last 60 years.”

Though the designer’s relationship with Britain’s most famous fictional secret agent is no more, it seemed appropriate that Brioni opened its new store on the same day as the latest film in the James Bond empire, Skyfall, premiered in the country.

As Pesci said, “not many Italian brands can say they have dressed the secret agent of Her Majesty The Queen. It was quite an achievement.”