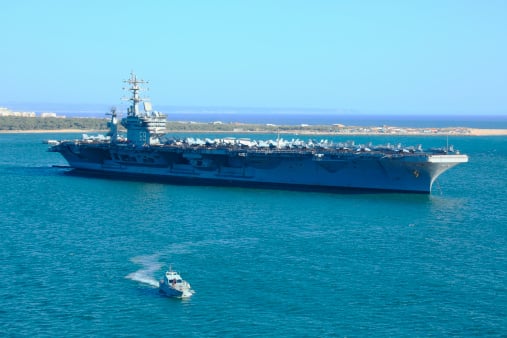 A replica of a U.S. aircraft carrier spotted near the coast of Iran is nothing more sinister than a movie set, Iranian media said on Sunday.

The New York Times, quoting U.S. intelligence, said last week that the Iranians were building a mock-up of a U.S. nuclear-powered aircraft carrier, possibly so they could then blow it up for propaganda purposes.

Satellite photos showed what looked like one of the U.S. Navy’s Nimitz-class aircraft carriers, complete with planes, rising from Iran’s Gachin shipyard, near the port of Bandar Abbas.

Iranian newspapers said it was “part of the decor” of a movie being made by Iranian director Nader Talebzadeh on the 1988 shooting down of an Iran Air civilian plane by the USS Vincennes. The United States says the downing of the plane, which killed all 290 passengers and crew, was an accident.

“The issue has turned into a good excuse for another wave of hype against Iran,” said the Alef news website which carries views close to the official line in Iran.

“Without any proof or real basis, Western media have jumped again to paint a more negative picture of Iran.”

A spokesman for the U.S. Navy’s Fifth Fleet in Bahrain acknowledged that the replica was “more akin to a Hollywood set than a warship.”

“We know it’s not an actual aircraft carrier. It’s made to look like one of ours … but makes us wonder: what is it all for?” Jason Salata told Reuters by telephone.

“We’ve seen them make target barges before and tow them and shoot them out as missile exercises and use it for state-run media. This one is a little bit of a head-scratcher. If you’re spending resources on this, what would it be for?”