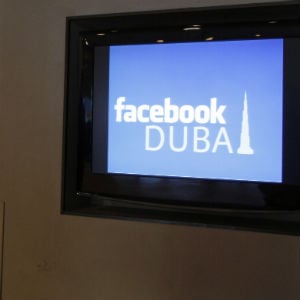 Social networking site Facebook has 45 million users in the Middle East and North Africa region, the company announced as it opened its office in Dubai on Wednesday.

The company’s Dubai office will service the entire MENA region, and will initially start with three employees.

“Dubai has a rich infrastructure, and we have received strong support from the government and other companies to begin operations here,” said Joanna Shields, Facebook’s vice president and managing director of EMEA.

The move into the Middle East comes as the company’s shares dropped drastically after its recent IPO launch on May 18. Facebook’s market capitalisation decreased $25 billion in its first seven days of trading.

While the company does not have any figures about its advertising revenues from the MENA region so far, it is hoping to tap the potential of the market.

“There is growth opportunity in the region, and that’s why we are here,” said Shields.

According to Jonathan Labin, the company’s head of Global Marketing Solutions- who will be leading the Dubai office, there is already increased interest among regional companies.

“Emirates started with us six months ago, and they launched their Facebook page just three months ago in March, but they have already managed to attract over 450,000 fans,” he said.

Other companies like P&G and PepsiCo also work with the social networking site in the region, he added.

The social media website’s global revenue model has come under severe criticism in the last few months, but according to Shields, companies do benefit by marketing on the site.

“We are working with firms like Nielson and we will soon come out with statistics to prove the efficiency of marketing through Facebook,” she said.

The company, which currently has 901 million active monthly users, made $1 billion in profit last year.