Expo 2020 Dubai's F&B offerings: Presenting the world on a plate

Can science fiction be served on a plate? UK-based Bompas & Parr, a multi-sensory food and drink specialist, certainly thinks so. It will debut its Future of Food: Epochal Banquet concept at Expo 2020 Dubai and you can expect the three-course menu to feature edible glow-in-the-dark creations and flavour-changing desserts in an immersive experience that blends the concepts of microbiology, hyper-intelligence, theatre and a side of culinary genius.

“We worked with 102-year-old scientist James Lovelock who has predicted the future as the age of hyperintelligence. We used that to create a piece of dinner theatre where you step into a museum of food, set 300 years in the future, and eat your way through the future of food from now until Lovelock’s Novacene,” Sam Bompas, director of Bompas & Parr tells Gulf Business.

Lovelock’s Novacene era is one where AI-beings become the dominant race and will treat humans as their cherished pets. To bring the concepts of Novacene to the now and onto people’s plates, Bompas has adopted a multi-disciplinary approach. “We’ve worked with a motley crew of architects, designers, graphic designers, chefs, mixologists, videographers, theatre directors – all with the aim of gathering the future together and presenting it on your plate at Expo 2020,” he says.

While Bompas’ exact offering at the Expo remained a tightly guarded secret until the official opening, he pointed out that his team has already worked with the chemistry department at the University of Cambridge on synthesising a biocompatible structural dye that can be glazed over a dessert to mimic the effect of eating a hologram, and also with Professor Charles Spence at Oxford University on crossmodal sensory science to allow diners to detect three different flavours within a single dessert, besides research carried out on cellular protein production. 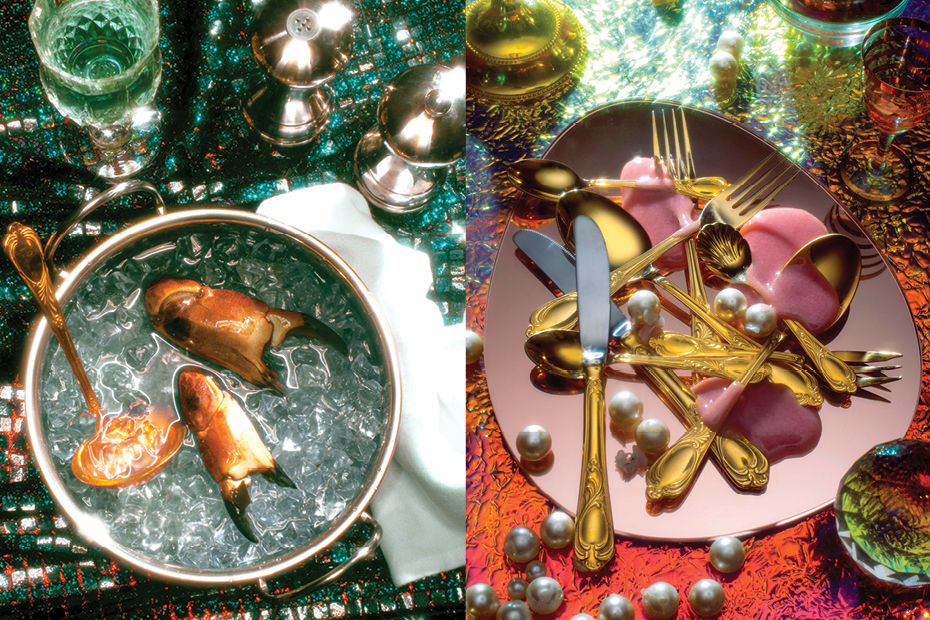 “It’s like William Gibson said, ‘The future’s already here – it’s just not very evenly distributed.’ We’re trying to draw together a few possible futures from around the world and situate them all at Dubai Expo so that when you visit, you can taste the future and make up your mind about it and what you would like to see happen,” says Bompas.

The Expo has traditionally been a vastly innovative and fertile ground for the introduction of generation-defining culinary innovations – think the ice cream cone, the hot dog bun and tomato ketchup. The Dubai edition isn’t about to come up short.

“With 192 countries showcasing the best of their cultures, there will be plenty of innovative discoveries from around the world, from the next superfood – teff [which is] a fine, low-calorie, gluten-free grain favoured by Ethiopia’s long-distance runners that is naturally rich in iron, calcium, protein and amino acids at the Ethiopia pavilion, to a cone-shaped vertical farm at the Netherlands pavilion,” says Galal Abdellatif, director of food and beverage at Expo 2020, which will feature over 200 eateries. 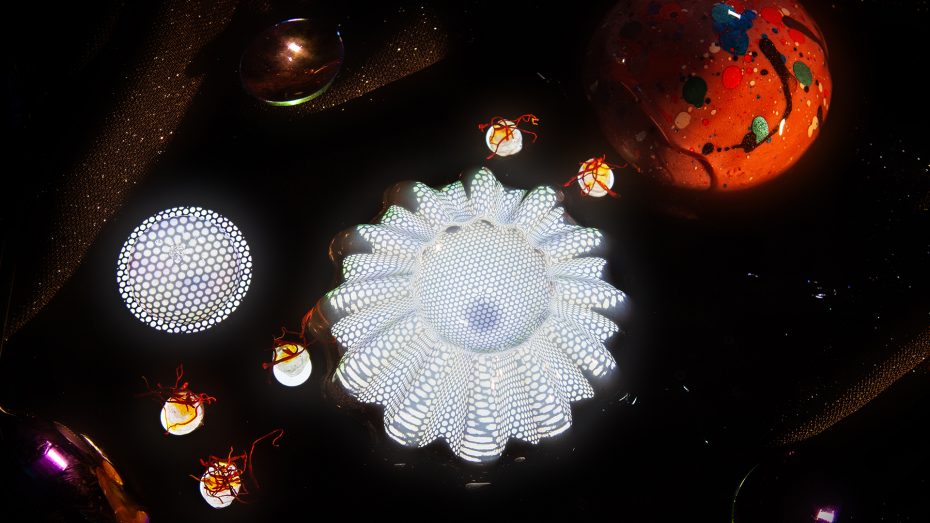 Among them will be American celebrity chef Matthew Kenney’s outposts. He specialises in plant-based cuisine and has previously worked on the Folia menu at the Four Seasons in Jumeirah Beach. Now, he’s bringing three of his concepts to the Sustainability Hub. Veg’d is a fast-casual dining offering, while XYST is a Mediterranean concept with the courses paired with cocktails and wines. Mudra, which has risen through the ranks to become a hotspot in Buenos Aires, will also be present at the Expo and in Kenney’s words will offer “a gourmet twist on things like tikka masala, empanadas, and even a large sushi selection.”

Kenney adds, “One of our main company goals and objectives is to create a more sustainable future, through food. We do not use processed ingredients, we limit waste, and use biodegradable packaging whenever possible.”

Other big industry names who will be present include chef David Myers who is bringing his concept, Adrift Burger Bar (expectations are high considering his LA flagship restaurant, Sona, was awarded a Michelin star for three consecutive years); Armenian-American chef, Geoffrey Zakarian, who will showcase The National Bar & Dining Rooms, his vision of a grand café, offering modern bistro cuisine; and New York’s Scarpetta, which will open its first-ever Burrata Bar at the Expo.

There will also be a strong focus on local dining options including The Arabian Tea House, founded in 1997 by Ali Al Rais, as well as UAE-born concepts including Dampa Seafood Grill, Al Farwania, and the Anthony Bourdain-recommended Ravi Restaurant. Another noteworthy local restaurant, and one that is born at the Expo, is farm2table which will feature locally-sourced produce served in dishes inspired by the Silk Road.

As Abdellatif explains, there has been a strong emphasis placed across the Expo’s eateries on sourcing locally. “Our beliefs around local sourcing are laid out in a document called Food Ethos. Our aim is to get 20 per cent of our ingredients from the local marketplace. In addition, the Food Ethos lays out our position on areas such as organic ingredients, affordable food and accessible food for people with special dietary considerations,” says the Expo’s F&B director.

While several of the restaurants offer dine-in options, for those visiting the site and are on the go, they can opt for a delivery service. Online food ordering major talabat has been appointed as the official food provider to Expo 2020. With an area of 4.38 sq km to cover, equal to over 600 football pitches, and potentially thousands of visitors to cater to during peak days, talabat took the route of rolling out its cloud kitchen at the site. 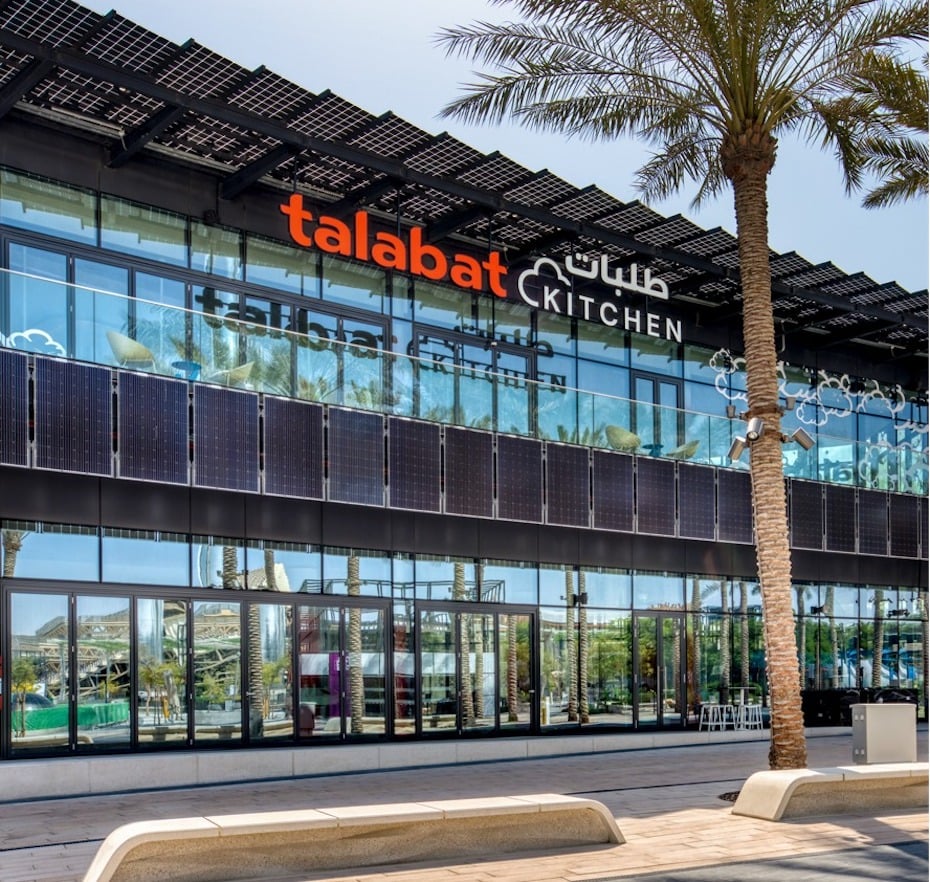 “All orders will be delivered from our state-of-the-art, innovative two-storey cloud kitchen. Our cloud kitchen is over 1,900 square metres with over 30 different brands operating in the kitchen,” says Jérémy Doutté, vice president UAE at talabat.

But he adds that the company, which also wants to be positioned as a tech firm, will be debuting futuristic delivery concepts at the Expo which it hopes to subsequently roll out across its other markets. For the first time, it will be introducing 10 autonomous robots delivering food at the Expo site. Also, Doutté says that talabat will be offering smart 3D-printed lockers at Expo with a contactless delivery option that it has developed in partnership with Kitopi and GrubTech. But apart from the delivery robots, a surefire hit with Instagram posts coming out of the site will be talabat’s robotic ice-cream confectioner and barista.

“Our robotic ice-cream confectioner and barista will wow visitors at Expo. Visitors will be able to order ice cream and coffee made by robots in our space,” says Doutté.

As for catering, Emaar Hospitality Group, the official catering, hotel and hospitality partner for Expo, has tapped into its staff from some of its top properties in Dubai including Armani Hotel Dubai, Address Hotels and Vida Hotels to be a part of the event. One of Emaar’s big draws is its 2020 Club by Emaar.

“The 2020 Club by Emaar is a dedicated hospitality venue, located at the very heart of the Expo 2020 Dubai site, offering direct views of the Al Wasl Plaza and the UAE pavilion. It features several floors of premium lounges, event spaces, a rooftop venue and Emaar Hospitality Catering,” says Alma Au Yeung, head of Emaar Hospitality Group Events and Partnerships.

Au Yeung adds that Emaar will also do its bit towards ensuring its operations at the Expo tie in with the sustainability theme.

“We are proud to announce our carefully curated ‘farm to table’ concept where ingredients from around the country will be brought in. At our hotels under the Emaar Hospitality Group, we pride ourselves on procuring most of our food items from local producers and we will continue this at our Hospitality & Rooftop Lounge at the 2020 Club by Emaar. We have also partnered with a waste management company to ensure an ethical system of waste disposal from our kitchens at the Expo 2020 site. All the uniforms worn by our team members at the 2020 Club by Emaar are also produced using sustainable fabrics,” she says.

F&B conglomerates have also stepped up with a presence at the show. PepsiCo has, for example, partnered with the Expo’s official payment technology partner, Mastercard, to open a Pepsi Go unmanned store driven by AI technology and contactless payments. Customers can use their payment cards to open the kiosk’s doors. Inside, the store uses AI and computer recognition technology to track the PepsiCo snacks and beverages that the shoppers select.

Once they’re ready to check out, they can exit the gates and the amount will be automatically deducted from their cards via the Mastercard Payment Gateway Services without them having to queue and bill the items.

“For over two years, we have been developing this checkout experience for the region alongside our strategic partners PepsiCo, and we are thrilled to see it come to life for Expo 2020 Dubai,” says Gaurang Shah, senior vice president, product management, digital payments and labs, Middle East and Africa at Mastercard.

While technology will take centre stage at Expo, it is the melting pot of cultures that will be reflected in the food at the event. That sense of cultural diversity is best highlighted through the world’s first bespoke African dining hall, Alkebulan. According to recent data shared by Dubai Chamber, the city’s food and beverage trade with Africa reached $13.9bn over 2015-2020. In 2020, Dubai’s total F&B trade with Africa amounted to $2.4bn, reaching the highest level since 2017. Alkebulan, at the Expo, aims to keep up that momentum and synergy between Africa’s F&B offerings and Dubai.

The dining hall is curated by chef Alexander Smalls, who is also a Grammy Award-winning opera singer. It will feature seven chefs who represent different aspects of the continent’s cuisines. The food hall hosts 10 counters, each with a rich culinary tradition. The Tasty Goat, by Kenyan-born chef Kiran Jethwa, will showcase a unique spin on nose-to-tail dining.

Senegal-born pastry chef Mame Sow meanwhile will be turning up with her Showbox Bakery serving up the famous Ethiopian injera flatbread. Award-winning chef Coco Reinarhz, who grew up in Kinshasa, will be present within the African dining hall with his Choma BBQ creation that will present a range of roasted, grilled and smoked meats, including a Zanzibari spiced rice and lamb preparation and Kenyan style beef skewers served with roasted green bananas.

Ultimately, while the six-month-long Expo 2020 will conclude on March 31, 2022, that isn’t going to spell the end of the road for the culinary scene at the Expo.

As F&B director Abdellatif says, “When Expo closes its doors in March 2022, there will be a nine-month transition period that will see more than 80 per cent of the site’s built environment repurposed as District 2020. The Sustainability pavilion will become a Science Centre, Rove Expo 2020 will remain and a number of Expo’s official premier partners have also already committed to establishing a presence in District 2020. There will be a strong F&B offering throughout District 2020 to whet the appetites of all those living, working
and visiting District 2020.”

From District 2020 to Dubai 300 years from now, concepts like the Epochal Banquet and robotic baristas will likely prove this Expo was centuries ahead of the curve.