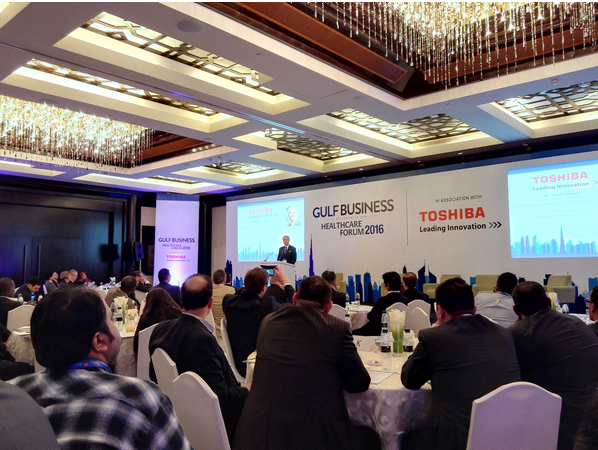 Healthcare professionals from across the world gathered in Dubai last night to discuss how advances in early detection and diagnosis can improve chronic disease prevention in the Middle East.

Cardiovascular disease is recognised as one of the leading causes of mortality in the Gulf, accounting for up to 45 per cent of early deaths in the region.

At the Gulf Business Healthcare Forum 2016, in association with Toshiba, experts in ultrasound, CT Imaging and MDCT described how advances in technology had contributed to preventing chronic conditions in other parts of the world.

He was joined by Royal Bournemouth Hospital’s head of cardiothoracic radiology Dr Russell Bull, who discussed how advances in CT Imaging technology made better use of x-rays passing through a patient and significantly reduced radiation exposure.

Ain Shams University’s professor of radiology Dr Ahmed Samir Ibrahim described how ischemic heart disease is expected to be the leading cause of death in 2020. He detailed how advances in MDCT made scanning blood vessels easier and new solid model imaging techniques using 3D printing.

During a later panel discussion, experts emphasised that sufficient training of at least a year was needed to operate the latest equipment. “We must invest in training because the technology is available,” said Fischer.

They also suggested that advances meant CT examinations should be used more commonly, despite resistance from other departments, and that medical guidelines were not keeping pace with technology.

“The guidelines are very much lagging behind the progress and the technology big time,” said Bull. “We’re at the level now where the radiation, if you’ve got the right equipment, there is no risk.”

The discussion pointed toward the need for earlier diagnosis and more personalised medicine for patients, but also emphasised that lifestyle choices including diet, exercise and relaxation, played as much of a role in preventing cardiovascular diseases as new technology.

“All diseases developed in our bodies are of our own making,” said Dubai Heart Centre Cardiovascular Health Services chief executive officer Dr Rajan Sadandam. “We can’t blame every disease on genes inherited from our parents.”

“Toshiba Medical Systems have been providing technologies products and support for your daily practices for the past 100 years and we are very pleased if some of them have contributed to establishing earlier detection or treatment,” he said. “TMS is committed to providing the same for the coming years and we want to be able to continue doing so for the next 100 years.”