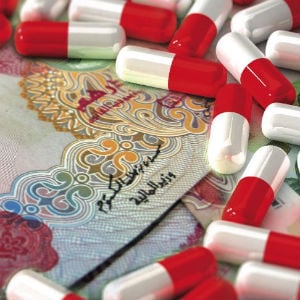 The UAE has the highest per-capita medicine expenditure in the Middle East, according to a recent report by the Dubai Chamber of Commerce and Industry (DCCI).

A recent study across the region also found that drug prices in the country were 23 times higher than World Health Organisation (WHO) recommended levels.

In an effort to combat the rising prices, the UAE’s Ministry of Health initiated a medicinal cost cutting drive in 2011. Its latest step came in November, when it announced a reduction in the costs of 115 drugs in the range of five to 45 per cent.

The measure, which is expected to take effect from this month, follows an earlier decision that slashed the prices of 565 drugs by five to 60 per cent from September 1, 2011.

The latest initiative was part of a strategic partnership between the health ministry and the private sector, said Dr. Amin Hussein Al Amiri, assistant undersecretary for Medical Practices and Licensing at the Ministry of Health, when he made the announcement.

It aims to reduce the prices of registered innovative medicines to accommodate the needs and demands of patients, he stated.

“The Ministry encourages investment in the private health sector through encouraging such strategic partnerships based on trust, communication and transparency,” Al Amiri told reporters.

Pharmaceutical companies in the country have welcomed the decision. “It’s a very good move,” said Dr B R Shetty, the CEO and managing director of local pharmaceutical manufacturer Neopharma and NMC Healthcare. “Pharmaceutical products are very expensive here, and this move will benefit the locals.”

“UAE drug prices will, in the medium term, now be among the lowest in the GCC and other Arab countries,” the company said.

But while the country waits for the changes to take full effect, the question arises – why are drug costs in the country so high?

While importing medicines from countries like India may help keep their prices low, importing drugs from markets like the US, England, France and Germany boosts eventual medicine prices in the UAE, according to Neopharma’s Shetty.

However, manufacturing medicines locally is much less expensive, he said.

The UAE’s local manufacturing sector is currently quite small and focuses only on basic medicines. According to the DCCI report, one of the biggest challenges for the growth of the local industry is that the pace of regional innovation is much slower compared with rival hubs such as Singapore, and hence hi-tech medicines are usually imported.

According to Jesper Hoiland, a senior vice president at Novo Nordisk, despite the high prevalence of diabetes in the country, the local insulin market still has a long way to go.

“Within the diabetes and insulin markets the main global players are multi-national companies and I don’t think this will change anytime soon,” he said, adding that for these companies, the region is still “too small a market to invest in actual production facilities.”

There are also concerns about the prevalence of counterfeit drugs that enter and exit the country. Almost 73 per cent of fake medicines seized at European borders last year were routed through the UAE, according to a European Commission report.

According to Shetty, international pharmaceutical companies will only enter partnerships when they have complete confidence in the local manufacturing company.

“The local manufacturing company must have very, very good facilities,” he stated. “So that’s why partners are also auditing the factories.”

Affiliations with global pharmaceutical giants will enable local companies to gain essential technical know-how, and which will help them manufacture hi-tech products.

Ras Al Khaimah-based Gulf Pharmaceutical Industries (Julphar) recently entered a joint venture with Saudi’s Cigalah Group to build a SAR300 million ($40 million) manufacturing factory in Jeddah. Once completed, the factory will produce and distribute pharmaceutical products in the Kingdom and across the Middle East.

Julphar, which saw profits of Dhs143.9 million during the first nine months of 2011, planned to manufacture insulin locally from last month.

Neopharma’s Shetty says his company is also making “good profit,” and is in talks with numerous multinationals for partnerships. In 2007, the firm collaborated with Indian biopharmaceutical company, Biocon, to start a new venture in Dubai- Neobiocon.

With the UAE’s pharmaceutical industry forecasts looking bright, more deals could follow. The sector generated revenues of $1.3 billion in 2010, according to Frost & Sullivan. A report from market research firm RNCOS predicts that the industry is expected to witness a compound annual growth rate of around 14.5 per cent up until 2014.

However, one hurdle that could hamper the local industry’s growth is the people’s mindset about the quality and cost of medicines. “The mentality of people here is that if the medicine is expensive, it’s good,” stated Shetty. “That is the case even if they know nothing else about it. They should also realise that local medicines are well regulated, and that the quality is good.”