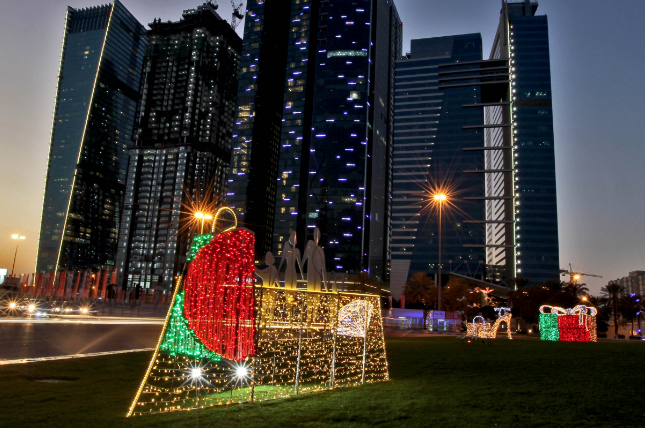 Thousands of visitors and the occasional celebrity are expected to descend on the city’s malls, with many major retail chains currently discounting products to 30 per cent as a ‘part sale’.

Further reductions are likely to emerge as the festival, entitled ‘Unwrap the exceptional’, progresses throughout January, before finishing on February 1.

To kickstart the festival, organisers Dubai Festivals and Retail Establishment have erected a series of colourful lighting systems and decorations at various locations, including Sheikh Zayed Road, the entrance to Dubai International Airport and by Mall of Emirates.

More than 150 events and workshops have also been scheduled, including a ‘Beauty Bonanza’ at Dubai Mall which takes place until January 8.

Meanwhile, extravagant fashion shows will be staged at Mall of the Emirates as streets are turned into runways in Al Fahidi, Burj Plaza and Meena Bazaar.

The Dubai Ice Rink will present ‘Fashion on Ice’ on January 17 and look out for fashion flash mobs at Ibn Battuta And Dubai Festival City Mall.

Continuing the festival’s ‘mega raffles’ tradition, the festival will this year be offering an Infiniti QX70 car plus Dhs 200,000 in cash to anyone who buys a ticket for Dhs 200.

Dubai was hit by a decline in retail spend last year, in part due to a fall in the number of tourists visiting from key locations including Russia and China.

However despite the recent slump, DFRE says it is hoping to “maintain the momentum this year” during the shopping festival.

In recent years, spend by regional and international visitors during the month-long event has amounted to an average of Dhs 15bn, according to DFRE .