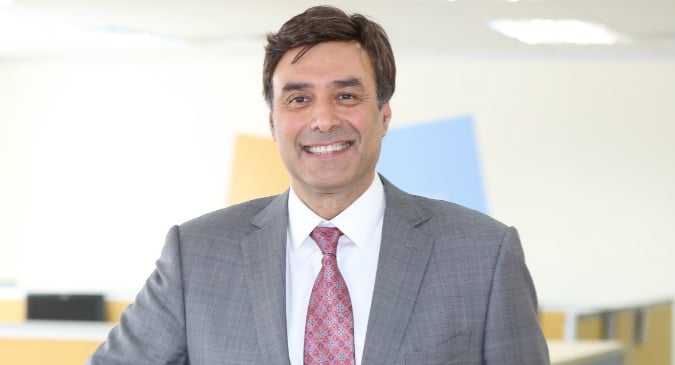 Shaygan Kheradpir is not a man who gets easily excited. The CEO of enterprise technology giant Juniper Networks carries himself with a reserve that you would normally associate with tall men like him.

But talk about the cloud, the internet of things, and how these developing trends will shape the future of society and business, and you see his eyes light up with honest excitement.

As the head of Juniper, a networking pioneer whose reins he took over at the beginning of this year, Kheradpir is all too aware of what is coming up next.

“Technology for the past 25 to 30 years has been marching to this point in time. And it is now dramatically changing every aspect of society and business,” says Kheradpir, who previously held senior technology positions at firms like Barclays and Verizon.

“The reason for that change is that technology has finally consumer-ised.”

In the past, says Kheradpir, technology was basically for businesses and consumers would get the overflow.

“But in the last two decades, technology has become consumer first,” he says. “There has been a dramatic change in that period in performance, form factors and price, resulting in the number of direct users of technology going from say a 100 million to five billion,” he says.

“And these five billion are now driving the innovation bus.”

Explaining his views further in detail, Kheradpir says that this growing base of technology users is putting pressure on the service provider, who has to innovate faster than ever before. “We have this trend here where more and more technology is being delivered as a service. Consumers are now using subscription services to watch movies and listen to music. Businesses are now using services such as Salesforce. There is also the consumerisation of things like heart monitors and cars.”

The delivery engine behind this service model is the cloud, he points out, including private clouds, public clouds, hybrid clouds. “These are massive 21st century steam engines. At the centre of this trend are networks like the ones we build.”

A second pillar of what Juniper is basing its future upon are high IQ networks – geared to get companies, products and applications smarter – that Kheradpir calls the foundation of the new creative planet.

“For many years, networks were thought of as transport. But these applications and products require networks to deliver intelligence,” says Kheradpir.

A good example of this is the company’s partnership with Tesla Motors, Elon Musk’s Silicon Valley-based automaker that has taken the electric car to the next level. Each Tesla sports car comes equipped with GSM mobile technology to connect back to the automaker’s network, for which it partnered with Juniper Networks for Junos, its proprietary FreeBSD-based operating system.

“In terms of network, Tesla needed something that was reliable, fast—very quick—and cost-effective,” said Scott Martin, IT director at Tesla in a recent note.

MIDDLE EAST ON THE MARCH

On Juniper’s Middle East operations and the perception that the region has been traditionally slow to take to technology, Kheradpir says that this is a part of the planet that is on the march and that understands sophistication and scale.

“Numbers show that they are on the move. Some of the numbers here, including the rate of growth in internet penetration and utilisation, are the highest in the world,” he counters.

Adrian Pickering, vice president, Middle East & Africa, Juniper Networks, tells us that even though the Middle East maybe lagging behind, change is afoot. “One of our telecom clients reported that YouTube utilisation accounted for 50 per cent of the traffic over their mobile and wireless networks.”

Kheradpir suggests that businesses and governments in the Middle East don’t need to go through a traditional technology cycle.

Giving an example of airport infrastructure being built across the UAE, the Juniper CEO points out that some of the most sophisticated and advanced work is being done in this sector. “Now are you going to put a legacy network into that infrastructure? What you need is 21st century technology.”

GOVERNMENTS GETTING IT RIGHT

The good news, according to him, is that the Middle East is the kind of region that can start at the right side of the technology divide without having to make a slow transition.

“The customers here understand this in spades. Networking is mission critical to them. These are sophisticated government agencies, financial services providers, oil and gas firms, airlines and they understand sophistication and scale,” says Kheradpir.

As of now, three countries in the Middle East stand out in Juniper’s revenue portfolio – Saudi Arabia, Qatar and the UAE. Pickering says that going forward, he is also excited about countries like Pakistan and Iran, which are behind in their wireless and telecom ecosystem.

“Pakistan is a country of 180 million and not all are connected by telecom services,” he says. “Our revenues may come from Saudi Arabia but three years down the line, countries like Pakistan will emerge as huge drivers.”

Pickering points out that there is a lot of pride and competition in the Middle East, which is helping push society towards more advanced infrastructure. “One of the very interesting things we are seeing here is the drive by governments to really transform the way they are doing things. For example, the push by health ministries to connect hospitals and clinics.”

According to Pickering, one of the greater challenges of operating in the Middle East for companies like Juniper has been the lack of local talent. “We are developing a talent pool in the countries we operate. We need it to fuel our own growth. Our customers are pushing us to help grow local talent as well,” he says.

Juniper has already made investments in developing local talent by forging academic alliances with local institutions in Saudi Arabia and the UAE.

One of the reasons, he says, that the Middle East has not had a huge boom in tech talent is because of the lack of an “e-economy” in the region. The region does not have a homegrown Amazon, Facebook, Google or eBay, which makes the technology sector unattractive for students coming out of academic institutions here.

“One of the inhibitors in making that e-economy is the harmonisation of processes for goods and products to flow across borders like the EU. If that happens, and I understand governments are talking about it, there is going to be a huge cascading effect.”

The high IQ network along with cloud building capability is what Kheradpir is hoping to turn around Juniper on as it sets course for a changed technology landscape.

In February, the company revealed its integrated operating plan (IOP) after a comprehensive company wide review, which is expected to cut costs and drive shareholder value.

The company expects to save $160 million by the first quarter of 2015 and to achieve an operating margin of 25 per cent for 2015, a 5.8 percentage point jump over 2013. This it expects to achieve by refocussing its efforts around cloud and high IQ networks.

Queried on the IOP’s progress, Kheradpir says that the process is going as per plan.

“Juniper has a legacy of building very large and sophisticated networking machines. The future has come to us and we are now putting all our strength in cloud building and high IQ networks,” he says.

“The IOP will basically match what we are excellent at with the way the world is going. We need to make sure we are laser tuned to it.”