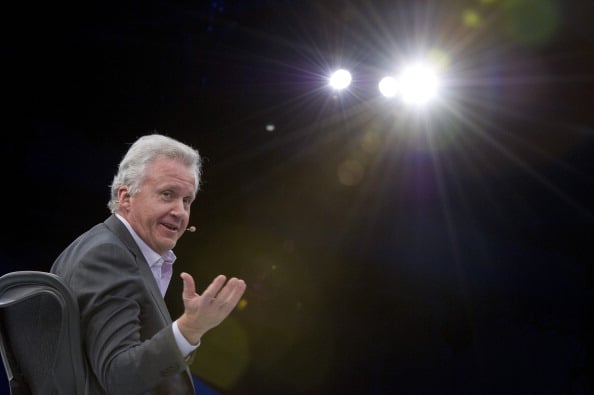 If anyone epitomises power, it’s Jeff Immelt. The chairman and CEO heads up the $210 billion US conglomerate General Electric (GE), one of the largest firms in the world. And when he’s not doing that, he’s masterminding US President Barack Obama’s Council of Jobs and Competitiveness – a role fraught with global consequences.

But as we sit down for a chat in GE’s grand manufacturing technology centre in Dammam, Saudi Arabia, the American icon is disarming.

He is visibly excited to be in the Kingdom, where GE has announced a massive $1 billion investment into the country’s energy, innovation and healthcare sectors.

“The Middle East is one of our fastest growing regions and that trend will continue. If you think about the businesses that GE is in – aircraft engines, power generation, oil and gas, water and healthcare – all of them are in big demand in the region,” he says.

Although GE does not disclose details about the share of the Middle East in global operations, the aggregate share of the MENA region and Pakistan is even bigger than China, Immelt reveals.

The company’s new investment in the Kingdom includes a new GE Innovation Centre in Dhahran Techno Valley, which will focus on improving local R&D facilities for energy and healthcare solutions. The centre is planned for inauguration in 2013 and will include laboratories and training rooms.

In terms of healthcare, GE has tied up with the Kingdom’s Ministry of Health (MoH) to open a learning and simulation centre in King Fahad Medical City. It will also set up a Performance Improvement Unit to increase operational efficiencies of MoH clinics and departments and work on improving IT systems in healthcare.

Overall, the investments will double GE’s workforce in the Kingdom to 2,000 by 2015, the company said.

While the investments will provide a major boost to Saudi Arabia, both in terms of enhancing its manufacturing capabilities as well providing much-needed jobs, they will also prove to be extremely beneficial to GE in numerous ways, says Immelt.

“The investment also allows us to establish a manufacturing base that we can use to penetrate other parts of the region.

“And the work we have done with the MoH is easily transportable to other health ministries on a global basis,” he adds. “All of this will lead to increased market share, revenue, faster growth, more responsiveness and better exports.”

The GCC is particularly attractive to GE since the region sits on approximately 54 per cent of the world’s proven oil reserves and 40 per cent of gas reserves, according to a report by Crescent Petroleum.

The report further states that world energy consumption is projected to increase by 50 per cent from 2005 to 2030, and fossil fuels (oil, gas and coal) will continue to supply much of that demand.