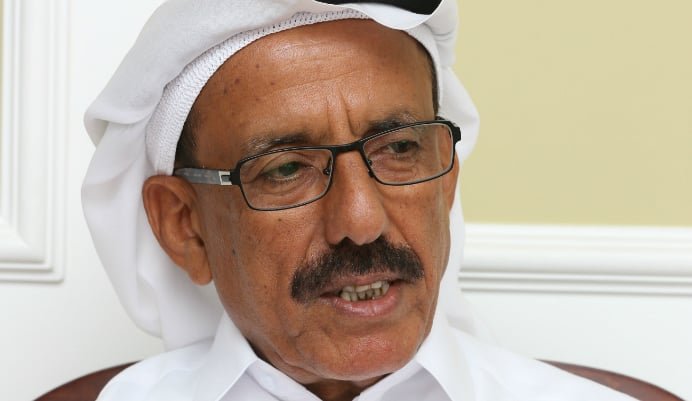 A vast, lofty ceiling and a sea of trinkets swamp the delicate figure sat in the corner of the chairman’s office. Now 64-years-old, and still practicing his daily game of tennis with the who’s who of Dubai, Khalaf Al Habtoor cuts a slight, energetic form that belies his age.

What’s his secret? “The best way to predict the future is to create it,” says the man who likes to push himself to the limit in every aspect of life.

Al Habtoor’s punishing work ethic is said to be what sets his business apart from less sprawling companies; peers and friends say it’s this trait that helped grow the Al Habtoor Group from one employee to thousands over the course of the last few decades.

“It is not easy to be disciplined. Some people say it’s like being a robot, but it doesn’t matter, I want to be a robot provided I am successful. I don’t want to be an idiot and not respect my time,” the chairman says.

Back in the days when Dubai was only just emerging from its pearling era, Al Habtoor already had his sights set on building one of the emirate’s first five- star hotels, The Metropolitan.

The 192-room hotel gained a special place in the hearts of locals and expats alike with its first-in-town luxury amenities. Since then Dubai has gained around 600 glitzy hotels and this – like most things – has not escaped the chairman’s attention.

It takes a certain triumph of perspicuity over sentimentality to bulldoze the first hotel you ever built, but that’s just what Al Habtoor did last year. He watched his corporate office fall to the ground amid a wrecking ball. In a sense, it’s symbolic of Dubai’s wider rebirth fuelled by mass trade, aviation, and today’s penchant for even glitzier tourism.

“It wasn’t easy to close it down. It is like a part of you. But sometimes you have to look to the growth, to the continuation of the company. The country is growing and you have to grow in parallel,” Al Habtoor muses, his small, alert eyes flickering in the window light.

“Either you stop there and be quiet and say ‘OK, I’m going to relax and sit in the garden’ or you have to go forward. We want to run in parallel with the growth of the country.”

Since the 1970s, the Al Habtoor Group has widened its remit from hotels into real estate, construction, motors, publishing and education. But last month Al Habtoor announced he’s going back to his roots with the ‘biggest residential and hospitality development in the world under construction’.

Al Habtoor City, a $3 billion complex featuring more than 3,000 hotel and residential units under one plot, dwarfs anything that has come before. The sprawling city, billed for completion in 2016, could be viewed as Al Habtoor’s labour of love for Dubai. It’s certainly taking a strong punt on a city that only four years ago saw its real estate prices plummet by 60 per cent amid the global economic crash.

“I am investing in my country and, after careful study, we saw that it will be positive, profitable and good. We will be participating in the growth of our country, along with the people and the government. I’ve decided that I have to go and assist,” Al Habtoor says.

“It will be like when people visit Buckingham Palace or Madame Tussauds in the UK, Al Habtoor City will be one of those sites, in addition to Burj Khalifa and Burj Al Arab. We are in the best location in Dubai, the heart of Dubai.”

And so, from the ashes of the Metropolitan Hotel, will rise a new landmark with prime placing on Dubai Ruler, HH Sheikh Mohammed’s newly re-launched arterial canal.

“We are funding it within our cash flow, we will finish Al Habtoor City hopefully in 30 months. We have the funds to support this project and others if necessary until the end of 2015,” the chairman says.

“In 2015, the banks are ready to fund any amount we want. For the time being, we say ‘thank you very much to everybody’ but we already have the funding for the project. We are in a very good cash position.

“I’ve also decided to postpone the IPO for several reasons. Maybe we will look at it in 2016, it’s possible. I will feel more comfortable after we finish all the projects. The problem is if you have an IPO then you have the people’s money.”

Al Habtoor is a man who has built his fortunes on the rise and fall and rise of Dubai – his career could be drawn by observing Dubai’s landmark moments, not least when his father introduced him to the late Sheikh Rashid bin Saeed Al Maktoum in the 1970s and the two began mapping the emirate’s changing face through construction.

But even a successful billionaire would be churlish to cast aside the lessons of Dubai’s economic crash in 2009. Does he think there will be another property bubble?

“I don’t think there will be a bubble but it depends on the areas. The Burj Khalifa, the Sheikh Zayed Road, the Marina and Jumeirah Beach Residence areas will all be excellent. And then they say prices are raised, what do they mean? Look at London prices – it costs millions to buy an apartment there!” he says. “We are in the centre of the world, everyone is coming here.”

“If you were to make a deal in any place in Europe, they ask about the price and they don’t take the deal, and it doesn’t create confidence. In the UAE, if you make a deal, you do it in no time. You pay the cheque and it’s done in 30 minutes. I’m fed up. Maybe they use your bid as a bargaining chip. I’m not happy about the European transactions process in terms of buying properties.”

The next three years are set to be busy ones for the billionaire businessman, as he sets to work on his biggest project yet, his magnum opus. He says he will use his life-learned skills for the management of Al Habtoor City.

“For success, the number one quality that anyone needs is discipline. Timing is very important and prayer. The choice of people is also important, but this is the most difficult factor… choosing the right people.

“Decision-making is also important. Decisions can only be taken by the leader. I make decisions, but it doesn’t mean all my decisions are right. I make mistakes too. But if you don’t make mistakes you also don’t win. You have to have the courage to make a decision,” Al Habtoor says.

Beyond the affable, almost fatherly demeanour, beyond his slight carriage, there’s a steely core to the UAE businessman, and a vision that morphed a tiny family company into a modern-day global empire. Will he ever let up and let someone new take his hard-worn shoes? No, never, is the answer to that.

“I’m trying to train my son as much as I can, but I don’t believe in retirement, I will be the captain of the ship,” he says with a smile, ushering me on, ready for his next meeting, in a lifetime of daily meetings, like clockwork.