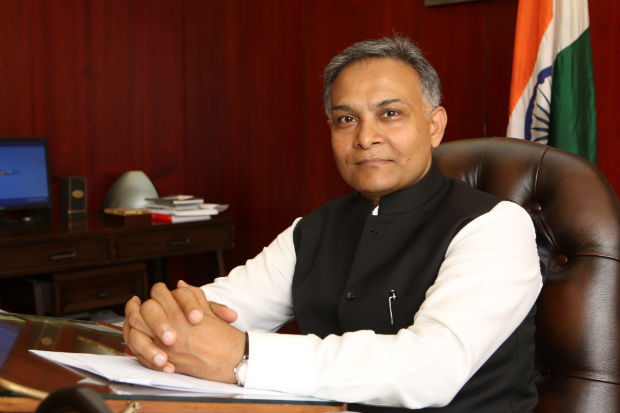 How can the UAE benefit from its long-term trade relationship with India?

The size of the Indian GDP is about $2 trillion. The Indian economy has many fundamental strengths and is the third biggest in the world in terms of purchasing power parity. Our long-term growth prospects are positive. It is also a fact that the component of international trade as a proportion to our GDP has increased significantly since the liberalisation of our economy in 1991.

The Indian domestic market is also one of the biggest in the world. We are also the closest largest economy to the UAE. India also recognises the great advantage the UAE, and Dubai in particular, holds as a window for trade with the MENA region. All these facts add up to a promise of a long-term trade partnership between our two countries.

What are the areas of common interest for both countries?

At the most obvious level, the biggest commonality of interest between India and UAE is in the economic and commercial sector. The bilateral trade and investments numbers speak for themselves. Shared culture, history and long tradition of people-to-people relations are also uniting factors. At a philosophical level, both countries share a vision of respecting diversity. India is probably the most diverse country in the world as is the UAE in terms of different nationalities that reside there.

In which areas of trade do you expect increased cooperation bilaterally?

I would like to suggest that the prospects of bilateral trade in the area of manufactured goods, especially machines, automobiles and automotive parts, renewable energy and food stuffs appear to be bright in the days ahead. Trade in services also appears to have good prospects. India is a major consumer of oil from the UAE and
we will continue to be an important customer for oil in times to come.

With Saudi and Kuwait focused on localisation efforts, has the UAE’s welcoming policy of Indian expats strengthened its status as a Gulf ally for India’s future trade ties?

The visionary leadership of the UAE has always had a special place for Indian expatriates, many of whom have been partners in the fantastic development and economic growth of the UAE.

The UAE continues to be a great host to Indian entrepreneurs, professionals and skilled & semi-skilled workers.As long as the Indian expatriate is considered to be hardworking, honest, law abiding and respectful to the local traditions and sensibilities, they will continue to be recognised for adding value to the great UAE nation.

How has India been benefitting from the large number of non-resident Indian businesspeople in the UAE?

Increasing migration and globalisation are irreversible facts of life. Fear of the brain drain is a thing of the past. Great developments in transport and communication have shrunk the world. Indian businesspeople who have a stake in the India-UAE economic partnership are increasing the GDP in both these countries by promoting trade, investments, technology transfers and exchange of skills and knowhow.

Which trade sectors have been subject to the most cooperation in all these years?

In the last decade the top items of trade between India and the UAE have been crude oil and products, gold, gems and jewellary, machinery, transport equipments, and food stuff.

There has been increased foreign investor confidence in India due to the economy’s sheer potential. Has there been a strong interest in India from UAE investors recently?

India is a leader among the emerging markets. The recent economic reforms were aimed at boosting FDI into the retail and aviation sectors which possess huge potential. Abu Dhabi- based Etihad is set to acquire stakes in Jet Airways and UAE–based retail giants like EMKE group and Landmark Group are already expanding their presence in India.

What are the future prospects for the India-UAE trade relationship?

The India – UAE trade relationship is robust and poised to grow even further. The UAE is strategically located in between the big emerging markets of Asia and Africa. The UAE can play a key role in increasing India’s trade and commercial relationship with the GCC, Africa and Central Asia.

How can both the countries mutually benefit each other within the global trade environment?

India was the second fastest growing major economy last year, after China. Given the proximity and familiarity, India’s large domestic market will be an ideal destination for UAE traders. On the other side, Indian traders will continue to leverage the UAE’s trade and logistics advantage in the region.