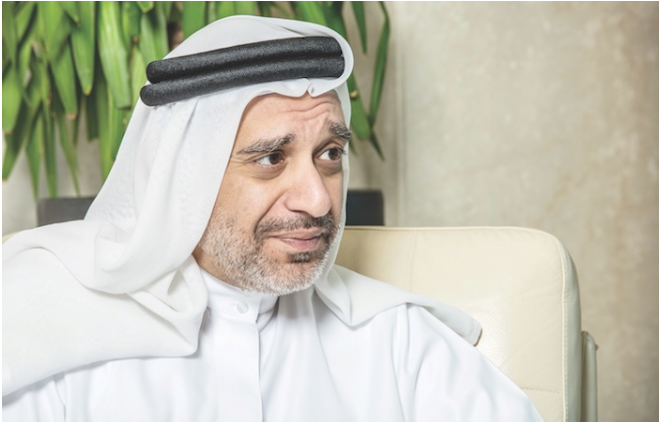 If there is one businessman in the region who is unfazed by – and in fact even seemingly happy to court – controversy, it is Mishal Kanoo.

The sixth generation chairman of the family-owned conglomerate Kanoo Group gladly tackles any topic thrown at him and admits that he is often dubbed a “conspiracy nut” for his outlandish views.

When we meet, however, he starts on fairly safe ground. He insists that 2015 was an “okay year” for his diversified company.

Established in Bahrain in 1890, the group currently operates in the United Arab Emirates and Oman across sectors including shipping, travel, machinery, oil and gas, logistics, chemicals, engineering and industrial activities. Along with its joint ventures, it employs over 1,200 people in the UAE alone.

Following the recent nuclear deal between Iran and the ‘P5+1’ world powers, Kanoo is optimistic about the year ahead.

“I’m expecting 2016 to be an okay year – not a bad year. If local governments get back to normal with Iran – whatever normal is – then I expect it to be a very good year,” he says.

“Having normal ties between Iran and the Gulf Cooperation Council states is in the benefit of everyone. From a business perspective, Iranian deals benefit both sides of the Gulf leading to more financial, economic and business benefit – and finally everyone’s life becomes better. Rather than political tension that causes everything to go in the opposite direction,” he adds.

Oil price crash: Who is to blame?

Arguably the biggest factor that has impacted Middle Eastern economies in recent months has been the dramatic crash in oil prices. Prices are hovering at around $35- $40 per barrel at present, compared to highs of $114 in mid-2014.

Disputing the acknowledged view that prices are volatile because of an imbalance in the market, Kanoo claims that oil is being influenced by external factors.

“The reason the price is going down – in my honest opinion – has nothing to do with supply and demand. It has to do with people making money,” he explains.

To attest his argument, he goes back to 2003 when oil prices stood at roughly $35 per barrel.

“By 2007-2008, prices hit a high of around $147 per barrel. That’s a five times multiple. In four to five years are you saying that the world economy grew five times? So how did it move?

“You have to follow the money and what it tells me is that there are certain classes in the world tending to make a lot of money.

“There are people playing with other people’s lives by making money for themselves. They haven’t worked a day in their lives – they are buying and selling something and moving the prices up and down because it suits them,” he argues.

Regionally, the impact of oil prices on businesses is not necessarily a direct one, says Kanoo.

Depressed oil prices have hurt Gulf coffers and governments across the region have announced spending cuts. Among them, Bahrain and Oman have approved steps to cut government expenditure by 30 per cent and 11 per cent respectively this year. Saudi Arabia and the UAE have also decreased spending while simultaneously cutting subsidies on fuel and other utilities.

A further proposal to implement value added tax across the region is also under review. The details are still under discussion but officials in the UAE have confirmed the Emirates will implement a tax of 5 per cent from January 1 2018.

Experts have long urged GCC states to impose taxes to diversify their economies away from oil. The new move has, therefore, been predominantly welcomed as a positive one.

Although Kanoo believes the result will be quite the opposite, with regional economies and businesses likely to suffer.

“I personally can’t figure out why VAT needs to be applied. There is no reason for it other than ‘I want to raise money for my coffers’.

“I really wouldn’t recommend it. Even if VAT rates of between 3 to 5 per cent are applied, all of a sudden the thing that you were selling your whole region on goes away. If I’m telling you that this is a tax-free haven, come and put your money and your business here, then how can you add this tax?”

Businesses and individuals will find alternative markets to operate in if they do not see an obvious tax benefit in the region, he claims.

“It [introducing VAT] makes sense if countries are posting deficits, negative and suffering. But I don’t see it. For the foreseeable future, oil and gas as a commodity is not going away. And if you add petrochemicals, you are looking at an industry that’s here to stay,” he states.

“The only reason I feel we should introduce taxation is if we have reached the point where we are desperate. And we are not there, not even close to it.”

Looking specifically at Dubai, Kanoo says there are “spectacular years” ahead, despite the recent gloom.

Dubai will host the six-month long Expo 2020 from October 2020 to April 2021, coinciding with the UAE’s golden jubilee year celebrations. It is anticipated that the event will attract 25 million visitors and add an estimated $24bn to the economy.

However, from a short-term perspective, Kanoo agrees that one of the emirate’s most closely watched sectors – real estate – will slow this year.

“Even until recently, prices were overinflated in certain places. Everyone is refusing to bring the price down artificially until it hurts. If I’m adding a lot more supply than there is demand and you are trying to keep prices stable – it doesn’t work that way. Prices have to come down,” he explains.

According to recent reports, residential sales prices fell by up to 15 per cent in 2015. The number of residential units sold also declined by around 30 per cent by end-November 2015 compared to the same period in 2014, statistics from Dubai Land Department showed.

“It’s not like they have an indispensable number of people coming to fill the place. There has to be an understanding of the laws of supply and demand. Should the government be in control of these things? I don’t know. I honestly don’t think so. It should be left to the open market. But people should also be intelligent. If the country is growing at 5 per cent, I can’t grow my company at 35 per cent,” says Kanoo.

Moving away from business

Apart from talking politics and business, a soft spot for the Bahraini-born businessman is education. A professor at the American University of Sharjah School of Business Administration, he is passionate about the subject and believes everyone should get access to the right education.

“Nationalisation programmes should not provide privileged jobs but should educate young boys and girls in this part of the world to give them an opportunity to become successful in what they do rather than to ensure them a job,” he says.

“If I ensure them a job – literally I’m telling them they are too stupid to do anything else. I don’t want to do that. I want to say – come let me give you an education, let me help you understand how to get things done and then go out and do it for yourself. And the better you do for yourself, the better for the economy and society.

“That’s the nationalisation that should be done. Give people the opportunity to learn and do something in their life rather than ensuring him or her a job. They should win the job on merit and not on a privilege. When you win it on merit you know you are good enough no matter where you are thrown,” he adds.

Looking to the future, Kanoo envisions the legacy of his company will be to “continue performing, being a good place of employment and making people’s lives better.”

Personally as well, the businessman believes in a similar philosophy and has set identical goals.

“The only thing I want to do is to be able to change people’s lives for the better. And if I cant do that, I’ve failed. I don’t like failing,” he says.

“The purpose of money is not to hoard; it is a vehicle to make a difference – hopefully a positive difference.

“You start with yourself, go to your immediate family, then your larger family, then the community and then to society and you make their lives better. For those people who go out of their way to make others’ lives worse – which I find shocking – I always wonder why? Why do you have to do that? Why do you think it is good for you to make other people suffer?”

He concludes, in his typically sardonic manner: “I think I’m put on this earth to facilitate and make other people’s lives better. And if that is not the goal – dear God – what a horrible life it would be.”