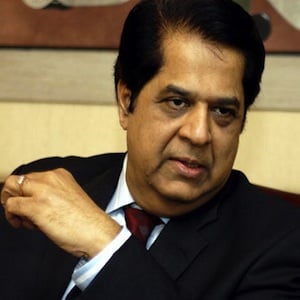 K.V. Kamath leans back like a man who has already accomplished much of what he wants to achieve. But this is not arrogance, this is not conceit – it’s simple, Kamath oozes power and wealth because he has it. He’s the embodiment of man who has spent decades influencing others – fiscally, vocationally, and as a mentor.

In Dubai to speak at the 3rd Pan IIM (Indian Institute of Management) Alumni Gulf Summit – the chairman’s voice is steady and unflinching, even when faced with the toughest of questions.

This is a man who has faced the most challenging of open-end quandaries: How to make ICICI bank a leader in a country that has little awareness of consumer lending. How to maintain IT leadership in a world where the paradigms of technology are changing at an unprecedented pace and global competition is rife.

When asked about India’s difficult and stagnant current economic situation, Kamath is so measured that’s it’s difficult to believe that he’s taking a different view on India’s 16 March budget announcement to almost everyone else on the planet – including the Indian government. But he has often taken long, and usually successful, punts on the economy and globalisation trends.

In the last year, India’s pre-recession label as the world’s booming darling has been overshadowed by inflation risks and corruption scandals. The heady days of consecutive nine per cent growth in India are over – for now – so why isn’t Kamath worried?

“You can see inflation easing, the next steps will be taken in the next few weeks. Then you should see the economy start to pick up; when momentum picks up in India it picks up fast, so my estimate is that growth will probably cross nine per cent for 2012,” he tells Gulf Business.

“In the context of certain challenges, particularly in terms of the dogged seven or eight per cent inflationary levels and high commodity prices, the government has managed to keep the deficit at 5.1 per cent. I don’t think it’s a bad balancing act at all,” Kamath said.

To date, rising inflation rates have compelled the government to hike interest rates 13 times in 19 months, crushing economic growth in the country. India’s 2012 budget has so far received a lukewarm response and has been widely criticised for its ‘zero risk’ stance.

“The growth momentum is going down in the context of the challenges on several fronts which are externally driven; part of the problem is that commodities are remaining high which ramps inflation up,” said Kamath.

“But when the rest of the world is comfortable with double-digit inflation and low growth, then a five per cent budget deficit can do well. Most spending in India is going on infrastructure – and that provides a return over time. It will return higher in the end. I am being a contrarian but that doesn’t matter.”

Kamath is also taking a long-term optimistic view on Indian’s banking sector, which in terms of consumer lending, only really took off in 2001. According to ICICI Bank, the current split across consumer lending products is 60 per cent on mortgages, 20 to 25 per cent on loans and 15 per cent on credit cards items.

The chairman said the Indian marketplace can be divided into three growth sectors: manufacturing, consumer lending and rural India, where the majority of the population have yet to get a personal bank account.

“The manufacturing sector is growing rapidly and they are now major borrowers from the banking system. Those companies need cash. Then you move onto the consumer – car loans and home loans. Aspirations are growing at a fast rate and affordability is also growing. Consumer lending is on the rise,” he said.

Kamath added that India’s banking sector would continue to grow between 18 and 20 per cent at a compounded rate. “ICICI has always been a little ahead of the average [growth rate] so I don’t think that’s a problem, our objective has always been to grow slightly faster than the average banking rate for India,” he said.

The chairman began his career in 1971 at ICICI and in 1988 moved to the Asian Development Bank before returning to ICICI as its managing director and CEO in 1999, before retiring and becoming non-executive chairman in 2009. Under his leadership, the ICICI Group morphed itself into a technology-driven financial services group with an international presence.

However, the chairman’s association with another Indian behemoth, Infosys, has been more recent. Kamath joined the IT giant in May 2009 and took over as chairman of the board in August last year from founder, N. R. Narayana Murthy.

The IT giant reported Q4 fiscal year revenues of $1.77 billion, down 1.9 per cent on the previous quarter. However, the firm reported that full year 2012 revenues grew by 15.8 per cent to $6.99 billion and projected growth of eight to ten per cent for full year 2013.

“Infosys is going through a very interesting transition, where the founders who built enormous value over the last 30 years are slowly stepping down from the role. The chairman stepped down from the position at 65-years-old, and the executives from the founding will step down at 60, so in the next three to four years, you will see two executives who founded the company stepping down,” Kamath said.

“So my boardroom role means talking through the succession process and to get a team in place with one leader who will take the organisation to the next level. That’s a responsibility. And how do we all live in a world where there are a whole lot of things are changing on a continual basis. How do we respond to that?

“New opportunities are coming up in emerging economies. Geographies are changing. New products are coming online every day. A mainframe computer used to take up an entire office floor. But today Infosys has evolved from that to selling customers a computer in their pocket. They handled that transition well so I think they are well set to manage [the coming change].”

The 64-year-old business veteran is currently at the helm of two global brands – it’s taken him a long time to get there, and there’s no sign of him giving up anytime soon. It’s clear that he relishes the challenge.

“There are several things that are required to build a global brand. You must have an ability to understand the culture of the global markets that you try to serve, this is critical; you must have a good product, and you must make sure that cost competitiveness is foremost. Then you need operational excellence: you need to ensure that time and again the experience of the customer remains the same. You can’t build a global brand on one or other of these – you need all of these to succeed.”