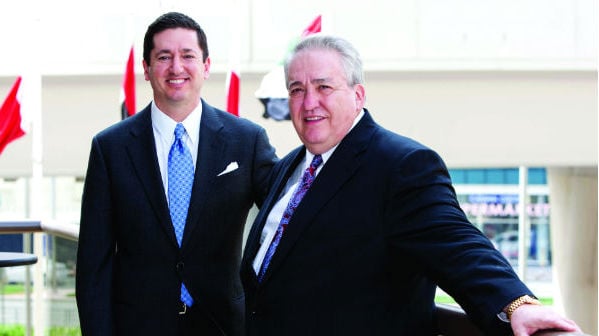 There comes a time in every business to pass the reins to a younger generation and for construction risk specialist Hill International there is no exception.

In January it was announced that the company’s only ever CEO, Irvin Richter, would be stepping down at the end of 2014, with his son David, currently president and COO, taking responsibility for managing the company.

“It’s not so easy to leave things alone, to let go. I understand that,” says Richter, reflecting on his nearly four decades in charge.

“It’s tough enough for the person to let go, but it’s also tough on the person who has to deal with the new responsibilities on a day-to-day basis and I’m very confident that David can handle those.”

Since the late 80s, Hill has been a cornerstone of the GCC construction market, managing some of the region’s largest projects including Abu Dhabi’s Grand Mosque, Dubai’s Palm and more recently huge infrastructure developments like the Riyadh metro and airport expansions in Oman and Bahrain.

At the beginning of 2014 the company announced a backlog of over $1 billion for the first time in its history, with the Middle East responsible for a significant portion of its global consulting fees.

But far from a simple tale of entrepreneurship, Richter says he started the US-headquartered business – which has grown from one professional in one office to 4000 professionals in more than 100 offices globally – only because his previous employer forced him to.

At the end of 1975, Irvin Richter, employed but still studying at law school, had a problem. The owner of the company he was working for wanted him to join his church, which rented a venue on Saturday evenings.

“Every time he invited me to join him at a church service on a Saturday night, I’d always use school as an excuse for not going. I’d got a class that night, I’d got a study group, I’d use every excuse I could get,” he recalls.

Eventually things came to a head.

“He finally decided the way to get me to go along with what he wanted was to put me in an untenable position, which is either quit law school or he was going to fire me.”

Richter called the dean at Rutgers, his university, asking him how to get out of the situation and he was informed if his grades were good enough he could take a leave of absence, which he did until the first semester of the next year.

He then resigned from the firm he had helped put in the construction claims business to start his own in 1976 with the help of funding from a partner.

As a result of his experience Richter says Hill International is careful in the way it handles its employees.

“I don’t want to put people in a situation where they have to be forced to make a decision whether they want to go or not,” he says. “We don’t do that to people, because I certainly don’t want to put my biggest competitor in the business. You never know who that is going to be.”

His previous employer was not pleased with Richter’s departure, particularly when one of the leading magazines in the industry opted to let him continue running a series of seminars he had negotiated in his former job.

“That one decision is probably more responsible than anything else for the success of Hill International,” he says.

“We got a tremendous amount of clients from doing claims seminars.There weren’t very many seminars in that industry at all and the ones that there were we were involved in.”

These seminars would sometimes have the unexpected effect of companies on both sides of a dispute contacting Hill, as was the case with the San Jacinto Mall in Houston, Texas.

In consecutive weeks Richter found himself approached by the contractor and then the owner of the project, eventually deciding to get both sides together over dinner. There he advised them to jointly hire Hill, paying half each, and make all their documents available in order to help them come to a conclusion.

The main issue was found to be a leaky roof and so Richter set up a process for a solution to be bid. The case then went silent so he assumed it had been settled.

It wasn’t until six months later on a plane back to Houston that Richter saw one of the owner’s lawyers who informed him that it had been settled, only for a hurricane to blow the mall’s roof off, meaning the insurance company paid to fix everything.

“I said well we don’t usually bring in higher beings, but when both sides are really nice we help when we can,” jokes Richter.

This was Hill’s first project neutral job, what was to become a staple service for the company.

Some 12 years after beginning operations, Hill took its first steps in the Middle East. A business that now participates in some of the region’s largest projects including the $7.8 billion King Abdullah Financial District in Saudi Arabia and the $390 million Pearl Qatar development.

“It was an interesting situation” that brought Hill to the region says the departing CEO.

The Abu Dhabi government was having trouble getting the contractors it wanted to submit proposals for projects. When the government asked them why this was “they said because you don’t pay claims and you don’t pay change orders,” recalls Richter.

In response Abu Dhabi set up a procedure for resolving disputes, with a claims committee, but having realised it needed some support in analysing the claims it searched for a company to help,choosing Hill in 1987. This contract is still renewed annually.

“If you’re a firm in the construction business and you’re going to open your first offices outside the US, Abu Dhabi in 1987 was a pretty good choice, because it puts you in that market just as the construction boom in the Middle East begins in the late 90s,” says David Richter.

From its work for the Abu Dhabi government, including helping get the Sheikh Zayed Grand Mosque project back on track, Hill was contacted by surrounding governments, the major one being Dubai.

“The government of Dubai came to us and said we haven’t had very much success in getting projects to finish on time and within budget,” recalls Richter.

Hill helped the Dubai government finish The Gardens project on time and with no cost increases, managing the building of 2,000 apartments and later 2,000 more.

Following this success Sheikh Mohammed’s team approached Hill to bid for its most ambitious project to date, the building of a palm tree in the Gulf.

“We said sure, although it seemed like a crazy idea at the time. Build a palm tree, where are you going to put all the people, all the cars and everything else?”

Hill won the joint management contract for what was to become known as the Palm Jumeirah with Parsons, but was eventually left as the sole project manager after Parsons opted to bid for the engineering contract instead.

In recent years Hill has transitioned from the private sector to the public, with infrastructure and public works now making up some of its largest contracts in the region.

These include the $256 million joint contract with Louis Berger Group to manage three lines of the Riyadh Metro and a $108.5 million contract to manage airport builds in Muscat and Salalah, Oman.

“One of the great things about the project management business is that the project is really to a large degree irrelevant. Every project has a budget, schedule and documentation, it’s got work that needs to be inspected. Our role is the same whether it’s an airport, highway or a skyscraper, unlike what the designers have to do,” says David Richter.

In a world where the tenure of a CEO is often less than five years, David Richter appreciates the stability his father has maintained at Hill International.

“We’ve been very fortunate because we’ve been in business 38 years, we’ve had one CEO and the company has been very successful. I’m hoping to be as fortunate and have 38 years in the position starting next year.”

Irvin, who will continue as chairman, believes the appointment will be good for Hill and good for him, as he approaches his 70th birthday at the end of the year.

“I will try to stay out of his way. It’s his turn to run the company,” he says.

What lessons then has he hoped to pass on to his protégé?

“The most important one is hire the very best people you can and treat them with the same kind of dignity and respect that you’d want to be treated, and David does that already so that’s not new to him.”

Richter also references the adage that two heads are better than one in management decisions, and expects to continue to discuss them with his son.

“Both David and I have found out that two brains are better than one, no matter how good the one is, two of them work better.”

Regarding Hill’s performance he says little will change, with David already responsible for generating revenue and profit as COO.

But his replacement is bullish given improving market conditions in 2013, which pushed consulting fees up 22.6 per cent to a record $512.1 million and operating profit up 518.6 per cent to $32.5 million.

“We don’t know if we’ll do 23 per cent growth again but certainly double digit growth is what’s expected [for 2014], and as the economy continues to improve and construction spending continues to grow we’re going to do fantastic things.”