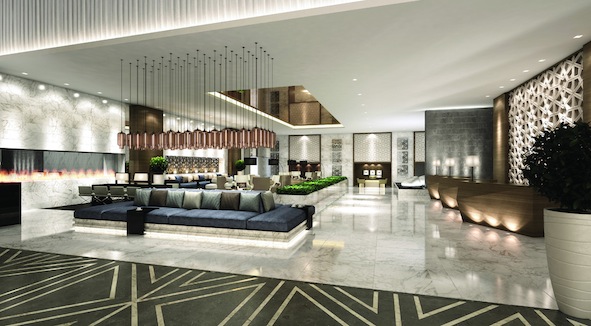 The Sheraton Grand Hotel Dubai, next to The H Hotel Dubai and opposite Dubai World Trade Centre (DWTC), is targeting a ‘soft opening’ on November 22.

Business Traveller Middle East was given an exclusive tour this week of the 474-room, five-star hotel, which is the fifth Sheraton in Dubai – although it’s the first purpose-built Sheraton since the Creek hotel, which recently reopened following renovations, opened in 1978.

It’s an attractive, contemporary hotel, with some interesting design touches – such as the three chandelier balls in the lobby, which is designed around an ‘elements’ theme with a grass bank, water fountain and fireplaces, and more discreet tube lighting can be found on the second floor meetings area. Arresting city views are universal from the front and naturally get more impressive the higher you go up.

But overall, if you were comparing it against some five-stars in the city, it’s conservative rather than ostentatious, which should appeal to most business travellers. Interiors feature plenty of Mashrabiya designs and white marble (the ‘Grand’ is not a new classification from Starwood, but reflects the sharpness of the design and furnishings).

To the left of the entrance is [email protected], with a reading ‘den’ in the corner, and to the right, access to the office tower, where the Asian NoviKov Restaurant & Bar is earmarked on the first floor. 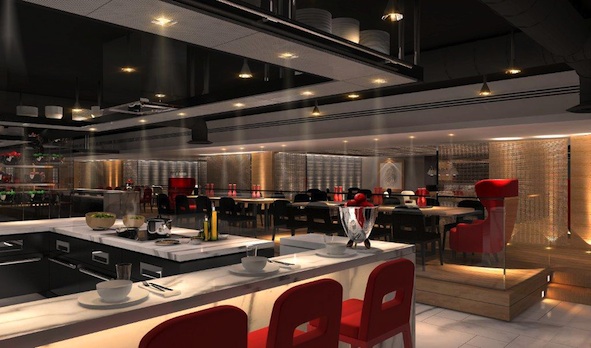 The signature, sixth-floor Feast all-day-dining restaurant contains stand-alone marble fixtures, to foster guest interaction (useful for single travellers, who may want a change from room service but don’t want to sit on large tables), although final decisions have yet to be made on other F&B venues, including a large one on the 53rd floor offering striking views.

Hotel rooms are located up to the 31st floor and on floors 32-51 are 180 serviced apartments which are part of Starwood’s inventory (100 one-beds, 60 two-beds and 20 three-beds). It’s a significant amount, adding 33 per cent more top-end rooms to this side of Sheikh Zayed Road alone. An executive suite is pictured. 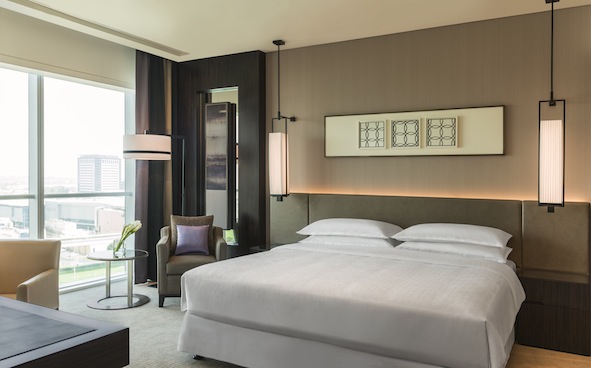 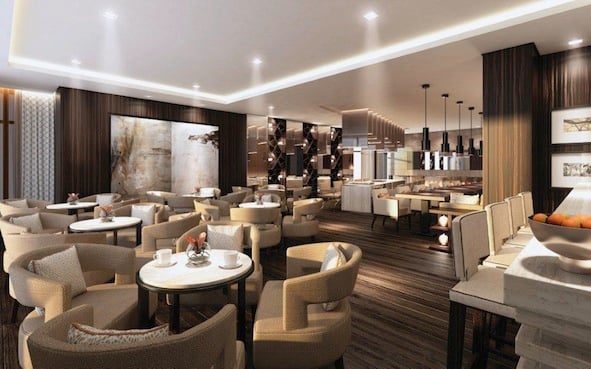 The ballroom is small, so it won’t be hosting large Arabic weddings, but it may appeal to corporates seeking discreet events and serve as a point of difference to its immediate five-star neighbours.

A 1,000sqm Shine Spa occupies the 52nd floor, while the very top has a rooftop pool and bar.

Starwood believes the hotel won’t cannibalise from other Sheratons as its staple business will be delegates visiting DWTC (who can join Fairmont and Conrad guests on the walkway) and it anticipates attracting GCC leisure guests at weekends given Dubai Mall is nearby.

DWTC’s recent announcement that it will host 10 more international congresses is timely, indicating the new supply is correlating with rising demand – although the new Sheraton, in line with its competitors, will face the perennial challenges of filling rooms in the May-to-October low season.

Introductory rates are from AED999 before taxes.