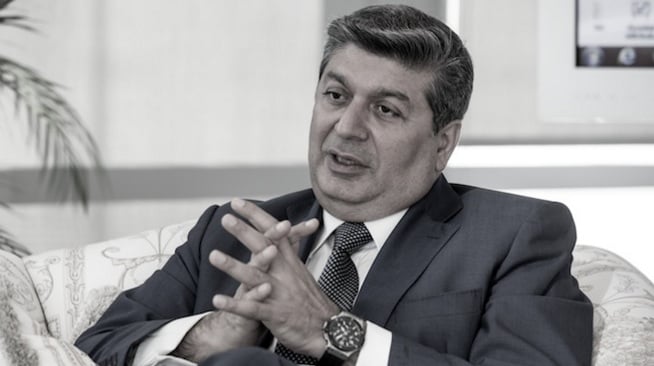 The headquarters of Dubai-based real estate developer ENSHAA is Emirates Financial Towers; a structure the company not only built, but built in style.

The 27-storey twin tower commercial development in the heart of the city’s financial district is an impressive enough structure as it is, but its automated parking system – the largest in the world – also earns it a Guinness World Record. Not something every property in Dubai can claim.

It is the kind of flourish ENSHAA tends to aim for with its projects, which also include private business and members club The Capital Club and the recently-opened Palazzo Versace hotel – both also in Dubai.

“If you look at ENSHAA overall, if you look at all of our developments, we are always striving for excellence in one way or another,” explains the company’s CEO Raza Jafar when we meet at his office several floors above the robotic parking system.

“Emirates Financial Towers is in the Guinness Book of World Records, the Capital Club was ranked by CNN as one of the 10 most exclusive clubs in the world, and Palazzo Versace stands out very clearly in the marketplace.

“Another one of our developments, [residential skyscraper] D1 has also won different awards for design, so our overall effort is to create products which reach an exceptional level in one way or another.”

With these well-known and highly visible achievements under its belt, ENSHAA has become synonymous with luxury, particularly since the launch of Palazzo Versace.

The hotel, situated within the new Cultural Village district along Dubai Creek, had its soft opening in November last year and expects to make its full opening in the second quarter of this year.

The project, featuring 215 rooms and 169 residences, was announced in 2005 and was originally scheduled to open in 2010, but the global financial crisis and subsequent economic slowdown led to a series of lengthy delays.

Since its long-awaited opening, however, Palazzo Versace has won rave reviews, not least for its décor. It is perhaps no surprise, given its rooms and communal spaces were exclusively designed by artistic director Donatella Versace herself.

However, the CEO adds that he always had a “firm belief that it was going to be completed,” and that while the delays might have meant a crises for some people, he saw them as opportunities.

“It meant that we could spend more time and effort looking at what we could do to improve the product further; make it more luxurious,” he says.

“One of the things we did was to add this beautiful mosaic work that you see in the lobby when you enter. It was originally supposed to be a carpet but we decided we were going to turn it into a mosaic because mosaics age really gracefully compared to a carpet. It was done by Fantini Mosaici, which is one of the most renowned companies in the world and whose business for generations has just been doing mosaic floorings.”

The hotel is a particular source of pride for Jafar, who points not only to the quality of the product itself, but also
the fact that ENSHAA was able to make it a bastion for sustainability in the luxury market.

He says: “From the initial requirement we looked at where we could cut down on the consumption of water, and carried that out. The lighting that we use has very low energy consumption wherever possible, the air conditioning’s overall efficiency was looked at all the way through and the materials we used are more insulating.

“So we did a lot of little things to make improvements.

“If you look at the chandelier in the lobby you will see that it is made with hand-blown Bohemian crystal. If you see the lighting on it, we are using a lot less wattage rather than having bright lights coming out of it. The light reflects out of the crystal and gives a really beautiful feel to it.”

The CEO explains that he also held meetings with other big hotel chains to discuss how to bring about more sustainability in the luxury segment of hospitality and states his belief that a major shift is taking place within the sector as well as outside it.

“It’s a new era for the whole world to be more socially and environmentally aware of our footprint and our impact,” he says.

“The global trend is moving towards sustainability. I am quite confident future projects will be much better on this front – for us and for others. There will be continual improvements in sustainability.

“I have a firm belief that sustainability is the way to look at business, and we as a company are firmly committed to that.”

For Jafar, sustainability and quality can go hand in hand. He explains that while being more environmentally aware, Palazzo Versace is also setting new benchmarks in service.

“We are all working hard to improve standards and I have a lot of respect for all our competitors who are putting in the effort to raise the bar continuously,” he says.

“Saying that, I definitely agree with the fact that Palazzo Versace has raised the bar a little higher in terms of services, not only the quality of the product.

“The trend we are working on is intuitive service, not just waiting for a customer to ask for something. We want to work towards knowing what the customer’s next wish could be; being more intuitive about the fact that if the sun is bothering him we don’t wait for the customer to come and tell us to fix the umbrella.

“This kind of attention to detail ensures that the customer experience is exquisite.”

As we talk it becomes increasingly clear that Jafar is a man who believes business and ethics need not be mutually exclusive.

Our conversation turns towards the moral responsibilities of private companies, inviting the CEO to open up on his philosophy in the workplace as well as his strong ethical streak.

“I agree with the phenomenon of the private sector getting involved more and more: both individuals and companies,” he says.

“Over a period of time we have started to realise that it’s not about going out, doing business and making money, and then thinking ‘I’ve made too much money now, let me go and do something good’.

“It’s not about doing business and not caring about how we are hurting people, hurting the environment or what other impact we have. It’s all part of the same thing and we have to understand that. If we are able to work hard and do our business responsibly then we are doing a very important job.”

He adds that operating businesses sustainably and ethically can often have a much more enduring impact than providing charity to those in need.

“If we look at it from a triple bottom line perspective, not only economic but also our social and environmental impact, all businesses can make a far greater and longer-term impact than just charity,” he says.

“There are a lot of issues that require strategic philanthropy and a lot of charity, but these are generally short term solutions. If we’re talking about long-term solutions, they will come about through economic growth.

“More and more people, institutions and governments are becoming aware of their responsibilities and capabilities of making an impact. A lot of us really thought ‘what difference can I make?’ But each individual can make a very big impact, from their personal consumption and personal behaviour, to the education they can provide their loved ones and circles.

“At ENSHAA we have a passion and a commitment to social and environmental responsibility, as well as to delivering on our promises and ensuring the quality of everything we’re involved with. We try to do well on both fronts; that’s what we aspire to do.”

ENSHAA’s future plans are as ambitious as you might expect, with markets around the world in its sights.

“We are expanding our private members’ club business and we are exploring possibilities of global expansion of Palazzo Versace,” says the CEO.

“We are very carefully looking at new projects in Europe, South Asia, East Asia and the Middle East.

“For the clubs, the strategy has been Middle East and Africa, so we already have clubs operating in Dubai and Bahrain, and in Qatar we are managing a private set-up of Qatar First Bank.

“In Africa our strategy is to complete our North, South, East and West Africa clubs. Our East Africa club is already operating in Nairobi, our West Africa club has been locked in and we are in the final design stage. We are negotiating over North Africa and also looking at South Africa.”

Jafar explains that the business clubs serve not just as a business opportunity in themselves, but as gateways into bigger possibilities in those markets.

“Part of our learning journey about possible opportunities in Africa is through the clubs,” he says.

“When we establish a club it gives us a particular experience in that place: how to set up a business, build up a team and offer services.

“Plus it helps us bring together an elite group of businessmen who we have an opportunity to learn from and partner with to expand further.”

As far as Palazzo Versace goes, Jafar admits that no new projects have been finalised yet, but confirms that they are in “very serious discussions”.

However, as the new developments take shape, two things are clear. With Jafar at the helm, not only are the properties likely to be high quality but they will give ENSHAA the opportunity to push even further the boundaries of sustainability in the luxury segment.