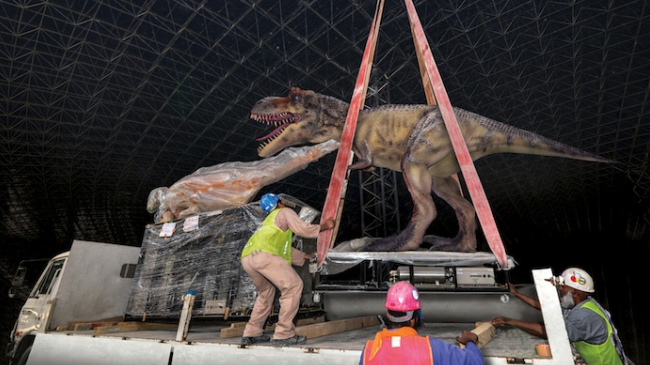 In an interview with Gulf Business, Lennard Otto confirmed that it was on track to open in early 2016.

“We have completed more than 80 per cent of the project so far from a construction and delivery standpoint. All of our civil works are done and the superstructure is fully enclosed. So the building is technically sealed now,” he said.

“Most of the rides are either installed or are being installed at the moment. What we are in process of doing is fit-out work for the restaurants and retail stores, testing and commissioning for the rides and final touches on the theming work around the park,” he added.

Set to become the world’s largest multi-brand indoor theme park when it opens in 2016, IMG is spread across 1.5 million square feet – the size of 28 football fields.

It will feature four zones including The Lost Valley–Dinosaur Adventure zone; Marvel and Cartoon Network zones; and IMG Boulevard.

Along with rides and attractions, it will also feature 25 retail shops and 28 food and beverage outlets.

“We also have a 12-screen cinema, operated by Novo, which will also be accessible to the general public,” Otto said.

“If you look around the area around where we are situated today, there are no other cinemas in the immediate vicinity. Hence the Novo Cinema component will cater to them. But we are also targeting the families that want to come down to the park and send their kids for the day to have a bit of fun while they might want to watch a movie,” he explained.

In terms of pricing, an adult ticket will cost Dhs 300 for entry to the park and unlimited access to all the rides and attractions.

“We expect people to spend an average of over six and a half hours in the park, so it’s a real value for money proposition if you are going to look at the entertainment value associated with that,” stated Otto.

“We have a very big offering and we are competing with parks in Florida and the Far East. Since our offering is in similar scale to those parks, our pricing is also directly in-line and competitive to what is in the market today.”

He also confirmed that a selection of ticketing options would be launched next month for annual memberships, a fast track system and a VIP option.

However, there are no plans to launch a cheaper ticket for those hoping to visit only one section within the theme park.

“Logistically it is quite complicated to do that because once you are in the park itself, you will have access to the entire experience and we also want people to experience the overall park,” he said.

While all the four zones within IMG will open during the launch, the park includes strategic expansion boxes which will be activated over the next five years.

“The park is built to be future-proof. We have been actively working on our expansion plan and the goal is to keep the offering fresh. We aim to have new attractions every year to draw people back.

“We will utilise and leverage the existing brands but enhance the offering by increasing the portfolio of characters that we have,” he elaborated.

He also stressed that the park would not fall back on technological advances: “It will be one of the most technologically advanced parks in the world when it opens.”

In terms of financing, Otto confirmed that following last year’s borrowing of Dhs 1.2bn, the park was fully funded until completion and opening.

“All the other expansion is planned to be funded through the revenues generated by the park itself,” he added.