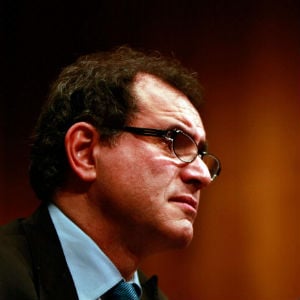 Nouriel Roubini, the economist who predicted the 2008 financial crisis, has now warned that the Eurozone will soon collapse.

“The Eurozone is a slow-motion train wreck,” the New York University economist said in a panel discussion at the World Economic Forum in Davos. “Not only Greece, other countries as well are insolvent.”

“Not all the members are able to stay,” he said. “Greece and maybe Portugal may exit the Eurozone -Greece within the next 12 months. Portugal may take a while longer.”

Roubini, nicknamed Doctor Doom, said that there was a 50 per cent chance that the Eurozone would break up in the next three to five years.

Meanwhile Greece has not yet managed to reach an agreement for a set of new austerity measures required for its 130 billion bailout. The talks stalled after leaders of the three coalition parties backing Greece’s government reportedly disagreed to meet creditors’ demand for 300 million in pension cuts.

Other measures include a 20 per cent minimum wage reduction and the sacking of 15,000 public sector workers. According to reports, the terms are aimed at reducing 3.2 billion.

Greek Finance Minister Evangelos Venizelos is meeting top EU officials in Brussels today, hoping to rescue the agreement. “I leave for Brussels with hope that the Eurogroup will take a positive decision concerning the new aid plan,” he told reporters.