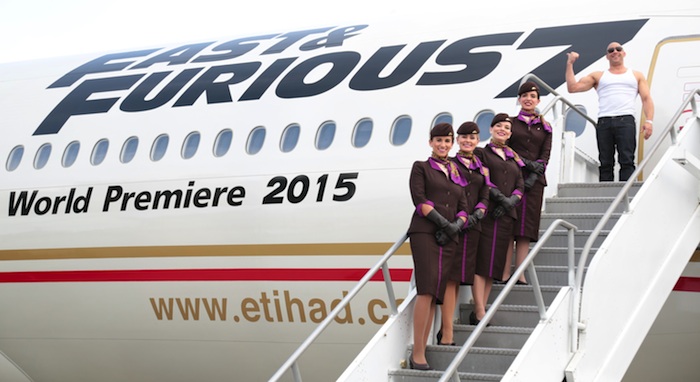 Abu Dhabi carrier Etihad Airways and Universal Pictures have unveiled a Fast & Furious branded luxury Boeing 777 airplane ahead of the launch of the latest installment in the popular movie series.

Called the Fast & Furious 777, the plane will fly the direct route between Abu Dhabi and Los Angeles, which Etihad started in June 2014. The decal will remain on the plane for the next four to six months, a statement said.

Etihad is also the sponsor of the Furious 7 world premiere, which takes place in Los Angeles on April 1, while the film is slated for release in theaters on April 3.

“When we began filming The Fast and the Furious in 2000, if you told me that we would one day have our logo on a wide-body jet, I would have said you were crazy,” said producer Neal H. Moritz.

Filming of the movie first began in Abu Dhabi in November 2013, when a visual effects crew captured helicopter shots, stunt footage and visual effects scenes at Abu Dhabi landmarks. However, shooting was suspended after Walker’s sudden death in a car crash in Los Angeles.

The movie resumed filming in April 2014, causing a social media frenzy in the UAE.

Shots of Abu Dhabi also featured in the movie’s trailer.

Abu Dhabi is striving to establish itself as a regional hub for international productions and in a bid to woo producers, the Abu Dhabi Film Commission currently offers a 30 per cent rebate on all qualifying spend in the city.

In the last year, it has seen the shooting of Hollywood film Star Wars: The Force Awakens, thriller Deliver us from Evil and Bollywood flick Bang Bang, among others.