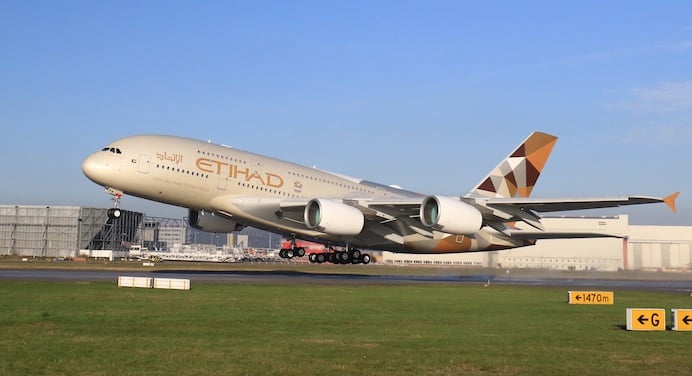 Abu Dhabi carrier Etihad Airways will contribute $2.9 billion to the US economy and support 23,400 American jobs this year, the airline has said, citing research by the consultancy Oxford Economics.

The study, commissioned by Etihad, projects that by 2020, the airline’s operating expenditure and capital investments will almost double to support 46,200 jobs and add $6.2 billion to the US economy annually.

The report comes even as the airline, along with its GCC peers Emirates and Qatar Airways, remains embroiled in a public spat with the three big US airlines over subsidies.

American Airlines, Delta Air Lines and United Airlines allege that the three Gulf carriers have received over $42 billion in government subsidies and have urged the US government to end its open skies agreement with the UAE and Qatar.

However, Etihad, Emirates and Qatar Airways have rebutted the claims, in turn accusing the US carriers of also receiving bankruptcy and pension related aid from the US government.

“Open Skies is good for competition and good for the consumer, but most of all the Oxford report shows it is also good for the American economy,” said Vijay Poonoosamy, VP International and Public Affairs at Etihad Airways.

“Since 2005, the year before we started flying to America, our expenditure and activities in the US market have supported thousands of jobs and helped to fuel domestic economic growth,” he said.

The study found that by 2020, Etihad will have committed $41 billion to the US’ GDP through direct expenditure on day-to-day operations and its long-term relationships with American companies such as Boeing, GE Aircraft Engines and Sabre Airline Solutions.

Since 2004, Etihad has introduced or ordered almost 120 Boeing aircraft at a current list price of $36.5 billion, including more than 70 B787 Dreamliner and 25 next-generation B777X aircraft.

This is further forecast to grow to about 300,000 in 2015, an increase of 65 per cent, following the introduction of new routes to Los Angeles, San Francisco and Dallas Fort Worth.

The study also found that $1.3 billion will be spent in America by the 260,000 international visitors who travel on Etihad.

Overall, the economic benefits of connectivity between the US and destinations in the Etihad network have been valued by Oxford at $410 million this year, rising to roughly $850 million by 2020.

“Our most important contribution to the US is choice. We deliver increased options for consumers and we connect American travellers to destinations which were poorly connected, or perhaps not connected at all,” said Poonoosamy.

“We are all growing as a result of Open Skies. That is good for the airlines, good for the US economy and good for customers.”