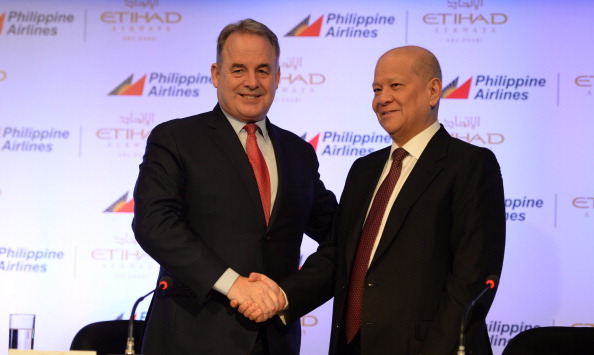 Abu Dhabi’s Etihad Airways announced that it has signed a strategic commercial partnership agreement with Philippine Airlines (PAL) to increase cooperation between the carriers.

The new commercial agreement follows the signing of a MoU between the airlines in Abu Dhabi on April 28, 2014.

Initially, the airline partners will place their respective ‘PR’ and ‘EY’ codes on each other’s Manila-Abu Dhabi flights to operate a combined total of 19 weekly flights between the two capitals.

Etihad will also place its ‘EY’ code on PAL flights from Manila to 20 destinations throughout the Philippines in the first phase, increasing to 28 during 2014.

The agreement also extends the use of Etihad’s premium lounges in Abu Dhabi and London Heathrow to PAL business class guests. This comes into effect from August 1 for the Abu Dhabi lounges and November 1 for London Heathrow, the statement said.

On the cargo front, the airlines have signed a letter of intent for a capacity agreement based on the bellyhold of all passenger services between Abu Dhabi and Manila, as well as connecting airfreight into Africa, Australia, the Middle East and South East Asia. The airlines will also work on the development of cargo products such as pharmaceuticals across their combined networks.

They are also developing a joint air pass scheme, which will enable overseas visitors to purchase an international flight to Manila and up to three additional sectors on PAL’s domestic network. The air pass is expected to go on sale by September 1.

Etihad president and CEO James Hogan said the scope of the agreement reflected the close ties between the UAE and the Philippines.

“This new partnership builds on the success of our original codeshare agreement and reflects the mutual respect, trust and goodwill that have built up over time – not only between the airlines but also between our governments.

“From a greater choice of passenger and freight codeshare destinations, to reciprocal loyalty programme benefits, and more efficient terminal operations – this is a truly customer-centric proposition.”

PAL president and COO Ramon S. Ang added: “This new agreement is one of the ways by which PAL hopes to further build its global network.”

It will also boost economic activity “through trade and tourism,” he added.

Etihad operates two flights daily between Abu Dhabi and Manila using a Boeing 777-300 aircraft with 28 seats in business class and 384 in economy class. PAL operates its new Airbus A330-300 aircraft on five weekly flights between the cities.