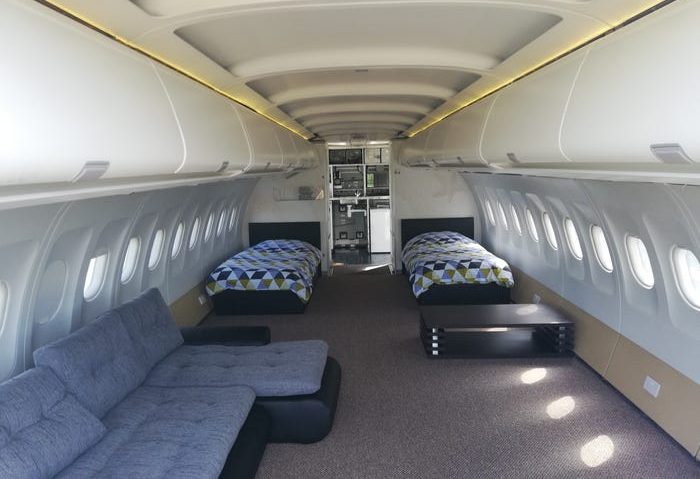 Getting a good night’s rest isn’t the easiest on a plane for many people – though it’s a bit simpler if you’re flying on an airline like Emirates or Etihad famed for luxury. But with round-trip tickets in Etihad’s The Residence costing at least $31,000 roundtrip from Abu Dhabi to New York for one person (though a relative bargain at just $41,000 roundtrip for two), it’s not exactly something many of us can afford.

It may not be The Residence, but you can sleep quite comfortably on an Etihad plane for quite the bargain – at least if you do so in Wales. That’s because an old Etihad plane has been converted into an Airbnb in the South-West Welsh country of Pembrokshire.

Apple Camping is a holiday rental where guests can sleep in the body of an Airbus A319. Toby Rhys Davies saved Etihad plane’s body from a scrap yard last year, spending the next several months transforming it into something people could sleep in without worrying about roaring engines, turbulence, gurgling chemical toilets, strange smells from steaming trays of reheated, watery penne pasta, or a chorus of crying babies.

Capable of sleeping four guests at a time, the plane “opened” to guests in August. Unlike a normal economy or even business class fare, there’s a shower with hot water and non-chemical toilet. And certainly unlike any plane in the sky, you can even venture outside the non-pressurised doors to enjoy the outside deck area or have a barbecue.

According to Travel + Leisure, the 27-year-old Airbus was first owned by Air Canada, then Air Malta. Etihad bought the plane in 2003, before retiring it in 2018 and sending it to the scrapyard, where it was claimed by Apple Camping’s Davies.

Like a normal flight, “tickets” (AKA nights) for the plane can be booked online. Unfortunately, free bags of peanuts do not seem to be included, though at least there’s no airport security to deal with or much of a risk of hours-long flight delays.

If an Etihad plane isn’t to your liking, you can also stay inside a 1970s private jet, a UFO, a large wooden witch’s hat, or “disco chapel” at the property.