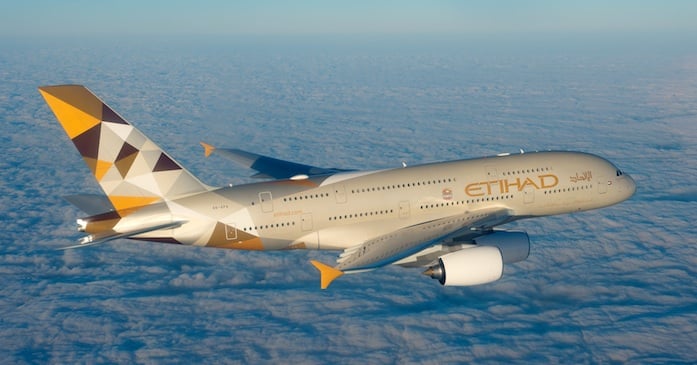 Abu Dhabi carrier Etihad Airways will begin daily A380 services to the Australian city of Melbourne from June 1, 2016, the airline announced on Monday.

The jumbo jet will operate flights EY460/461, one of the airline’s twice daily Abu Dhabi-Melbourne services. It will replace one of the Boeing 777-300ER aircraft currently deployed on the route.

The new A380 service will increase the total number of two-way seats on the route by 26 per cent to more than 11,500 seats per week.

Etihad Airways’ president and chief executive officer James Hogan said: “Melbourne is an important point on our global network, and our Abu Dhabi to Melbourne services continue to generate very high seat load factors on a year round basis.

“After just three months of operations, demand for our second daily service is already exceeding our expectations.

“Deploying the 496-seat A380 to Melbourne will enable us to accelerate our growth in the Victorian market by providing additional capacity, particularly in business class, where demand for seats continually outstrips supply.”

The double daily service will also provide travellers from Melbourne access to more than 900 weekly connections in 50 markets across the Gulf region, the Middle East, Africa and Europe.

“What’s more, the A380 service from Melbourne will connect in Abu Dhabi to the A380 to London, offering our London-bound guests the convenience and class-leading comfort of an all-A380 service all the way,” added Hogan.

Etihad began services to Melbourne on March 29, 2009 and added a second daily service to the route on August 1, 2015. It is currently the only airline offering double daily non-stop services between Melbourne and the United Arab Emirates.

Victorian minister for Tourism and Major Events John Eren said: “Etihad’s decision is good news for Victoria’s visitor economy. It means more visitors from all over the world will see for themselves everything we offer.”

Etihad received delivery of its first A380 from Airbus late last year and introduced the jet to London Heathrow from December 2014. Currently, two of the airline’s three daily flights to London are operated by the A380.

The Residence by Etihad is an ultra-luxurious three-room suite that includes a living room, separate bedroom and ensuite bathroom. Guests using the service will also be offered a VIP travel concierge service including a luxury chauffeur, private check-in and lounge, an Etihad Butler on board and an inflight chef.