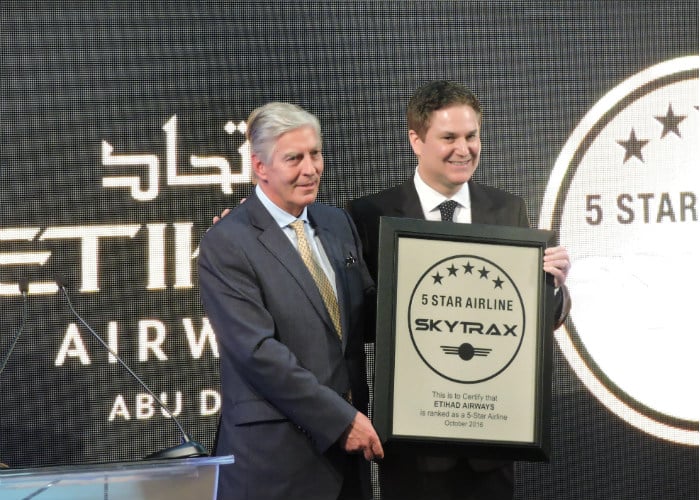 Etihad Airways will soon roll out an Android app and equip front-line staff with “meaningful data” to boost interaction with guests after becoming the first UAE airline to receive a five-star Skytrax rating.

The Etihad Innovation Centre close to Maqta Bridge, which hosted today’s event, will soon be home to Etihad’s digital hub. CEO Peter Baumgartner said: “The digital roadmap will have a constant stream of delivery, some of it is directly visible to guests but a lot will happen in the back end, how we deal with information and data.

“When I walk into a London five-star hotel, I get instantly recognised whereas in aviation unless you quote your 16-digit frequent flyer programme, we don’t know anything about you. There’s a big catch up.”

The Skytrax rating was provided by a London-based research consultancy following a three-month audit. Etihad joins Qatar Airways and eight other international airlines in achieving the top rating, while Emirates has a four-star rating.

Baumgartner said it won’t rest on its laurels. “We’re living in a fast-paced world and the only constant is change,” he said. “This is a continuous journey which never stops.”

Spurred on by cheering crew – and a glowing video message from brand ambassador Nicole Kidman – CEO Peter Baumgartner spoke with passion and pride today at achieving the top Skytrax rating.

Clearly this was a key event in Etihad’s 13-year history, and an altogether warmer atmosphere than three years ago, when the airline fell out with Skytrax over the detailed rating process.

It was also one of the CEO’s biggest moments since the management reshuffle which saw James Hogan appointed President and CEO of the Etihad Aviation Group.

So is Etihad the ‘best’ carrier in the UAE? By Skytrax stars, it may now be one ahead of Emirates, but rankings aren’t always indicative.

Etihad’s nine A380s are a fraction of the 82 in Emirates’ fleet, and while Etihad’s Midfield Terminal Complex is taking shape, Abu Dhabi International Airport is a different operation to DXB, now the world’s largest airport for international passenger traffic.

Baumgartner was keen to stress it’s “not a celebration that we have arrived but proof point that we are on track”.

It’s always debatable whether passengers really take much notice of such ratings. But in a world of fine margins, airlines like to make a big deal of industry accolades and it helps keep everyone on their competitive toes.