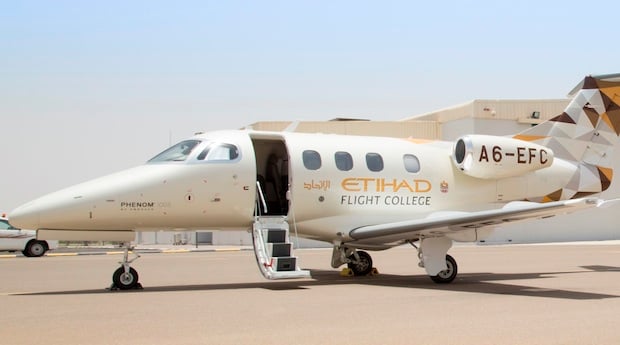 Etihad Flight College has received the first of four Embraer Phenom 100E training jets that it ordered, it announced on Monday.

The Al Ain-based facility, a wholly owned subsidiary of Etihad Airways, will be the world’s first flight school to use the Phenom 100E in the initial phase of training.

Etihad Flight College announced the purchase agreement for the four jets in June 2015 in a deal valued at about $30m.

The second aircraft is expected to arrive at the college’s base later this month, with two further jets being delivered in early 2017.

The new arrivals would bring the number of aircrafts in the trainer fleet up to 22, which includes two Extra EA 330 LT aircrafts that were added to the collection earlier this year as well as 10 Cessna 172SP Skyhawk and six Diamond DA42NG.

Starting this year, the Etihad Flight College will become the first organisation in the world to use a multi-engine aircraft in the core phase of its multi-crew pilot licence (MPL) training programme.

“Designed for high utilisation, with a pilot-friendly cockpit and docile flying qualities, the Phenom 100E is considered an obvious choice by airlines to prepare its cadets for jet operations,” Pellegrini said.

Etihad Flight College general manager Philip Chandler added: “Our flight college is a world-class training facility, producing a constant stream of well-trained, highly skilled pilots – the majority of whom are Emirati – for the growing operations of Etihad Airways. The Phenom 100E is an exciting new asset for Etihad Flight College. The airline-grade technology, performance and reliability make the Phenom an ideal initial training aircraft to prepare our students for line operations.”

Set up in 2014, the Etihad Flight College currently has 186 cadet pilots enrolled in the training programmes, including 122 Emiratis. Apart from training pilots for Etihad Airways, the college also trains pilots for Etihad’s equity partner airlines – Alitalia and Air Seychelles.