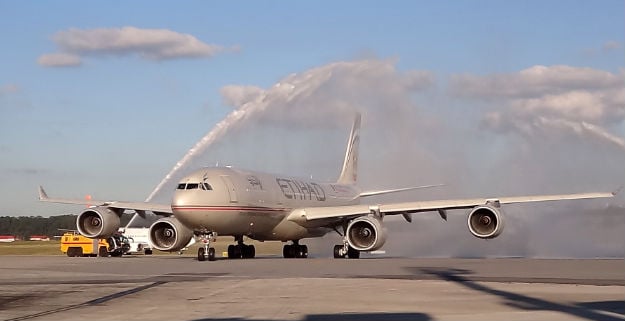 Abu Dhabi-based Etihad Airways announced the launch of services to its first destination in South America, offering non-stop flights from the UAE capital to Sao Paulo in Brazil.

The first flight touched down at Guarulhos International Airport on June 1, Etihad said in a statement.

The route will be serviced by an Airbus A340-500 aircraft, seating a total of 240 passengers across three cabins and Etihad will operate direct flights to and from Sao Paolo three times a week.

The new service marks Etihad’s entry into its sixth continent. The airline is increasingly targeting high growth areas and is hoping to benefit from Brazil’s strong economy and its massive 200 million population.

Trade ties between the UAE and Brazil are also getting tighter, with both the nations seeing a rise in bilateral trade and investments.

Etihad also employs several Brazilians: its first ever commercial flight (to Beirut) 10 years ago used a wet-leased aircraft, operated by a Brazilian crew and many of those cabin crew and pilots are still working with the airline, it said.