by Dominic Ellis and Neil Churchill 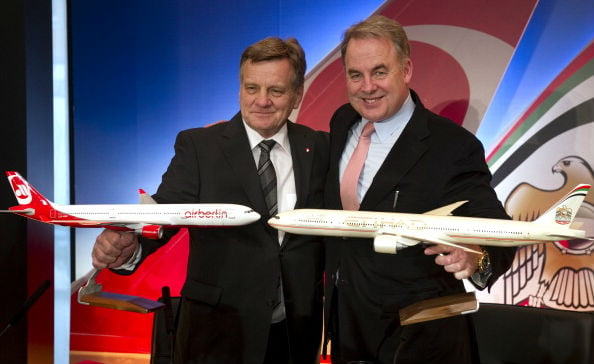 Etihad Airways is set to buy a 70 per cent stake in a new company incorporated to own airberlin’s topbonus frequent flyer programme as the German carrier looks to cut costs and pay down debt.

The move comes 12 months after Abu Dhabi’s flagship airline bought 29 per cent of the German company and granted airberlin $255 million in loans.

The total transaction value is €200 million, which is being financed by an equity injection of €50 million and debt financing of €150 million, provided by HSBC International and Commerzbank. Airberlin retains 30 per cent with a clause allowing it to buy back 10 per cent from the Gulf carrier at a later date.

Germany’s number two airline after Lufthansa has not made an operating profit since 2007. It has said the deal with Etihad will generate €184.4 million ($242.70 million) in revenue and will be included in the carrier’s 2012 results.

It paves the way for what the airline has called a ‘global loyalty management platform’ incorporating Eithad Guest and other partners such as Air Seychelles, in which Etihad has a 40 per cent shareholding, although it is understood new codeshare partners Air France-KLM are not included.

The new entity will seek to offer new opportunities for topbonus members to collect and redeem topbonus miles around the world, including the ability to use PointsPay to convert miles into cash payments at more than 30 million outlets worldwide.

James Hogan, Etihad Airways’ President and Chief Executive Officer, said: “The loyalty program sector is a faster growing and higher margin business than the airline industry.  This new approach allows both our companies to reap greater rewards together, with opportunities to generate sustained profits from our loyalty programs.”

Airberlin is due to the announce details of a new saving programme by the end of the month, dubbed ‘Turbine 2013’.

The airline has been struggling to recover after amounting debts following their rapid expansion. At the end of the third quarter this year, the carrier’s net debt stood at €853 million ($1.1 billion) – about four-and-a-half times its shareholder equity.