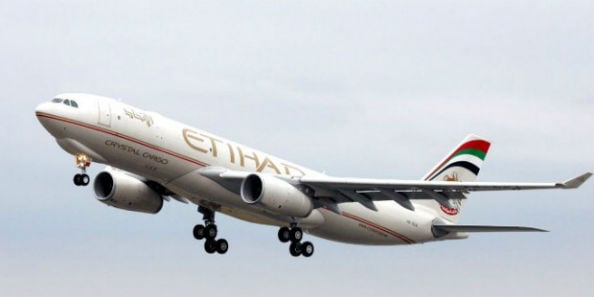 Abu Dhabi carrier Etihad announced that it will step up its flight frequency to Dallas/Fort Worth by operating daily services from next year.

The airline’s service to the Texan city of Dallas/Fort Worth will be introduced to Etihad’s network on December 3, 2014 and will be upgraded to a daily service by April 16 2015, a statement said.

The service is the airline’s sixth route in the US, after New York, Washington DC, Chicago, Los Angeles and San Francisco, which launches on November 18, 2014.

A Boeing 777-200LR aircraft will be operated on the route, offering a total of eight seats in first class, 40 seats in business class, and 177 seats in economy class.

The increased frequency will also help improve travel connections between the US and other key markets including the GCC region and 12 cities served by Etihad Airways and its partner Jet Airways across India, such as Delhi, Mumbai, Hyderabad and Chennai, the statement said.

Etihad Airways is also planning to offer connections with its codeshare partner American Airlines on a number of domestic routes from Dallas/Fort Worth to major centres across the US.

“Our Dallas/Fort Worth service was announced at the end of last year and the market response has been extremely strong,” said James Hogan, president and CEO of Etihad Airways.

“To meet the needs of travellers flying into and out of Texas, we will increase our frequency sooner than expected on the route, with daily flights commencing from April 2015.

“Our service offering will be enhanced as a result, with the convenience of a more frequent operation and improved connections for guests in both directions, through Etihad Airways’ fast-growing international network and the networks of our airline partners.”

Etihad is currently in a major expansion drive and in 2014, has launched services to Medina, Jaipur, Zurich, Los Angeles, Yerevan, Perth and Rome with daily flights to Phuket to be launched soon.

The Abu Dhabi-owned airline also plans to add six new routes to its network in 2015.