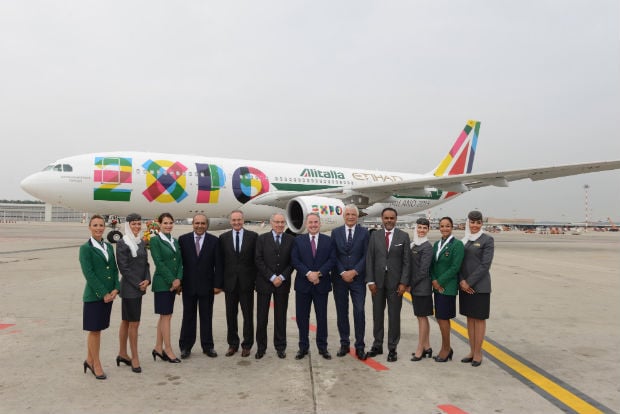 Abu Dhabi-carrier Etihad and Alitalia have unveiled two new aircraft in Expo Milano 2015 livery to mark their co-sponsorship of the global exhibition.

The airlines will fly an Airbus A330-200 aircraft each with the Expo livery starting from October 21 between Rome and Abu Dhabi, a statement said.

“The co-sponsorship of Expo 2015 is evidence of the growing partnership between Alitalia and Etihad Airways and will play in a key role in bringing the targeted eight million visitors from around the world to Milan,” said James Hogan, president and CEO of Etihad Airways.

“I believe Expo 2015 will once again demonstrate the power of travel and tourism to drive growth and stimulate job creation and economic development in Italy.”

Flight frequencies between Milan and the region are also expected to grow significantly during Expo 2015 when Alitalia will commence daily flights between the Italian city and Abu Dhabi. These flights will also connect Etihad services to other markets across the Middle East, South Asia and Africa.

Currently the Abu Dhabi carrier has one daily passenger and freight service to Milan.

In addition, Etihad and Alitalia will link Milan with 560 online and codeshare destinations across the globe, the statement said.

The two air carriers are also implementing an integrated marketing and communication plan that include onboard and ground announcements for their flights along with various print and digital campaigns.

Etihad purchased a 49 per cent stake in Alitalia for $2.31 billion earlier this year, giving the UAE-carrier access to Europe’s fourth largest travel market and an additional 25 million passengers.

The deal is also expected to bring the loss-making Alitalia back on track to break even by 2017 through a major restructuring programme and cash infusions from Etihad, officials said.