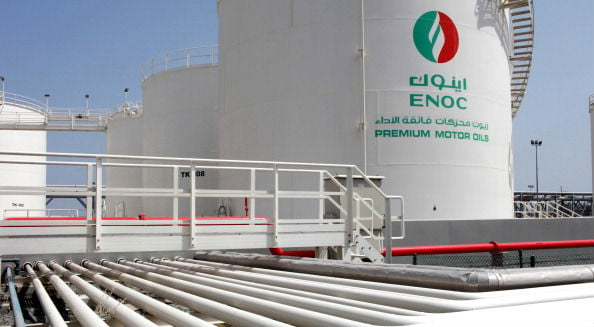 The $142 million bulk liquid petroleum terminal has a storage capacity of over 141,000 cubic metres and is fully automated. It will have facilities to receive jet fuel from marine tankers and from the adjacent ENOC-owned refinery, and tanker truck loading facilities connected to oil tanker berths.

The project also features a 60 km jet fuel pipeline that links the terminal directly to the Dubai International Airport. The pipeline is being developed with the “highest safety and capacity standards” and will also have a branch-off connection to Dubai’s new Al Maktoum International Airport, ENOC said in a statement.

“It is equipped to meet the growing demand for jet fuel, in tune with the Dubai International Airport’s growth.”

ENOC is the single largest supplier of jet fuel at the Dubai International Airport and stated that it has the capability to supply more than 70 airports in the Middle East and Asia-Pacific regions.

Most of the jet fuel is sourced from ENOC’s refinery in Jebel Ali, which is operating at its full capacity of 120,000 bbls/day. The company is in the process of undertaking a debottlenecking project that is expected to increase capacity to 140,000 bbls/day.

“HTL aims to become the largest independent terminal service provider in the bulk oil storage in the Middle East, Africa and the Mediterranean,” the statement added.