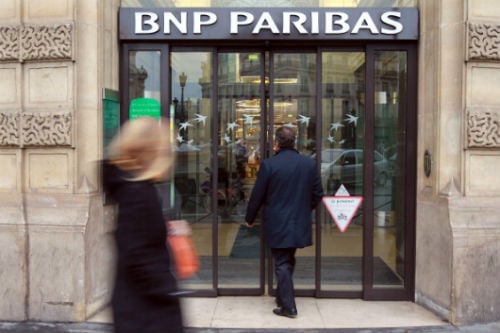 Emirates NBD, Dubai’s largest bank, has emerged as the frontrunner to buy BNP Paribas’ Egyptian retail business, three sources familiar with the matter said, in a deal likely to raise $400-500 million for the French lender.

BNP, France’s biggest listed bank, put its retail banking business in Egypt on the block in June, seeking to shore up its capital base and exit non-core operations.

The sale attracted interest among large regional lenders including ENBD and Morocco’s Attijariwafabank, which were looking to gain a foothold in Egypt.

ENBD’s offer for the business was highest in a second round of bidding that took place earlier in December, the sources said, speaking on condition of anonymity as the matter has not been made public.

A spokesman for the Dubai bank declined to comment, as did BNP Paribas. Officials at Attijari were not immediately available for comment.

Despite continued political turmoil in Egypt, some Middle East investors are keen to beef up their presence in the country after last year’s revolution there. Meanwhile, European banks are trying to repair damaged balance sheets by selling some overseas units.

ENBD wants to expand its Dubai-centric business, having been hit in recent quarters by its exposure to debt-laden, state-linked entities in Dubai which have been forced to restructure billions of dollars of obligations.

A deal still does not appear imminent since Egypt’s central bank is reviewing the offer and other terms before approving the transaction, one of the sources said.

“They (ENBD) were aggressive on the pricing side and outbid the other party. It’s now up to the central bank to make the final call,” the source said.

“The regulator in Egypt wants to do these deals one at a time and now that the SocGen deal is agreed, the priority will be to see this transaction through.”

Large regional banks in the Middle East, flush with funds and relatively unscathed by the financial crisis, are looking to grow through acquisitions; picking up stakes in entities owned by Western institutions is often an attractive option.

The BNP Paribas deal would be ENBD’s first major expansion of its regional presence through an acquisition since it was created in a state-backed merger between Emirates Bank International and National Bank of Dubai in 2007.

The bank is looking for acquisitions in fast-developing African markets to satisfy investor demand for growth it is unlikely to deliver at home, chief executive Rick Pudner said in an interview with Reuters last month.

ENBD, 56 per cent-owned by state fund Investment Corp of Dubai, aims for international revenues of around 15-20 per cent of its total in five years’ time, up from five per cent at present, with acquisitions likely to play a key role in achieving the target, Pudner said at that time.

BNP has retail, corporate banking and private banking operations in Egypt; it is only looking to sell the retail business. The lender operates nearly 70 branches in the country, where fresh political unrest erupted last month over a push by President Mohamed Mursi to award himself wide powers.