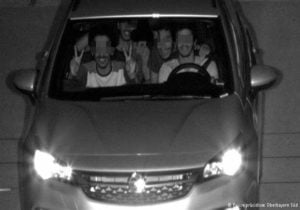 Four Emirati tourists have been fined after driving at almost 200kph while on holiday in Germany.

A picture published by Der Spiegel showed the men laughing and gesturing with the v-sign to a speed camera while driving an Opel Astra in the southern German state of Bavaria.

The speed limit on German highways is 100kph, almost half the 193kph the vehicle was travelling when the picture was taken.

“This is not acceptable behaviour and does not fit with the UAE’s good reputation. It’s a mistake… our young people shouldn’t be behaving this way,” he told the publication.

“We need to speak with them and educate them so that these kinds of offences don’t happen in the future.”

During the summer, Gulf drivers are regularly seen driving on European streets.

In London, they have become infamous for receiving parking and speeding fines while driving expensive and elaborate supercars.