Emirates unveils Dubai’s Museum of the Future livery on A380s

Dubai carrier Emirates on Wednesday unveiled a new custom A380 livery dedicated to the Museum of the Future which opened to the public in February.

The airline will unveil the special livery on a total of 10 A380 aircraft, which will in turn fly to around 30 destinations over the coming year, including those in Europe as well as key Arab regional cities.

The first Emirates A380 (A6-EVK) to sport the new livery took off from Dubai to Los Angeles on Thursday, May 5.

There will be nine other aircraft that will sport the livery which will be applied onto it at the Aircraft Appearance Centre at Emirates Engineering.

Our journey to the future begins now.

Introducing our latest livery in celebration of Dubai’s newest icon, the #MuseumoftheFuture!@MOTF pic.twitter.com/tfVadCFD5W

The ring shaped, Arabic calligraphy encapsulated building encircles both sides of the aircraft, and features the message ‘Journey to the future’ across the fuselage, covering a total of 336 sqm on the A380. The façade is decorated with quotes from Sheikh Mohammed bin Rashid Al Maktoum, Vice President and Prime Minister of the UAE and Ruler of Dubai.

Designed by architect Shaun Killa, the Museum of the Future in Dubai spans an area of 30,000 sq m, with the seven-storey pillarless structure rising 77 metres above the ground. 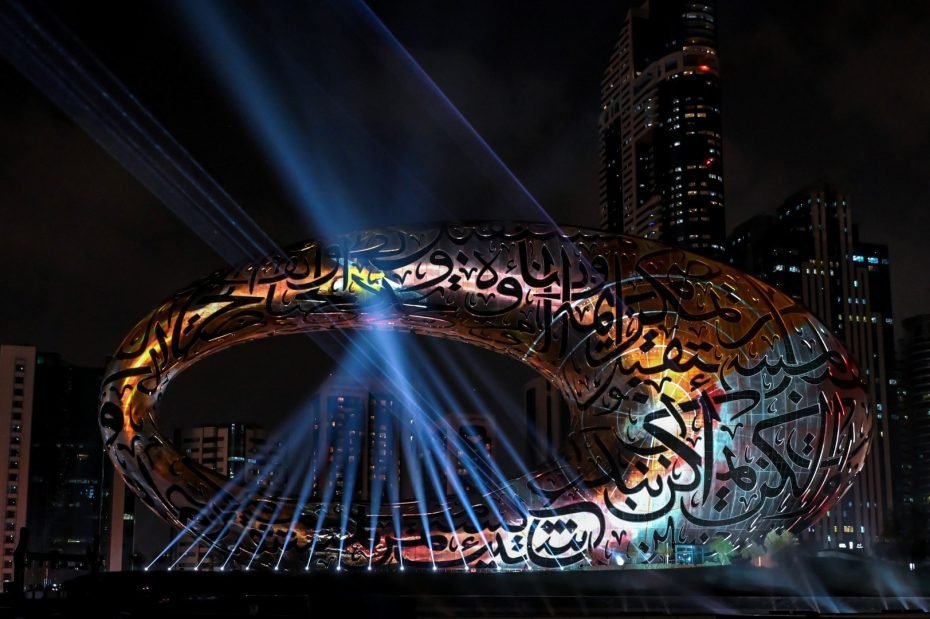 The stainless-steel facade, which extends over 17,000 sq m, is illuminated by 14,000 metres of Arabic calligraphy designed by the Emirati artist Mattar bin Lahej. The facade consists of 1,024 plates manufactured entirely by robots.

Read: In pictures: Sheikh Mohammed inaugurates Museum of the Future

The Museum of the Future employs the technologies of virtual and augmented reality, data analysis, AI and human machine interaction. It addresses several questions related to the future of humans, cities, societies, and life on Earth and outer space. Across five different exhibitions, it explores the future of space travel and living, climate change and ecology, health, wellness, and spirituality.