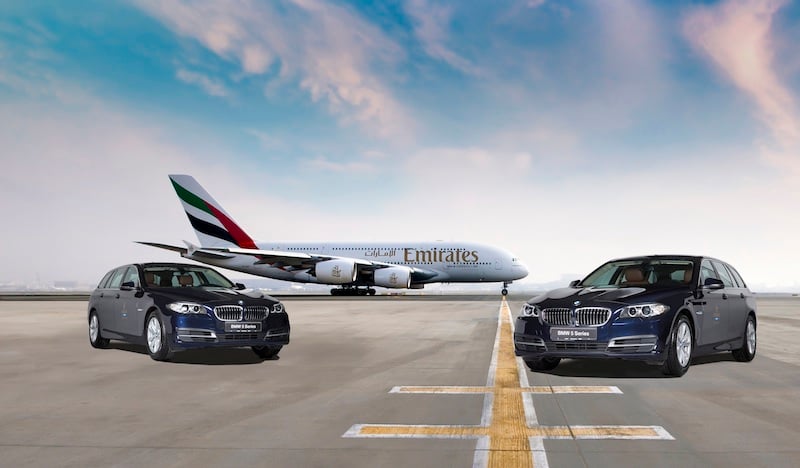 Dubai airline Emirates will now be using BMW cars for its chauffeur service for business class passengers in the UAE, it revealed on Tuesday.

The new fleet, featuring BMW 520i Touring cars, is being rolled out from now until the end of the year, as the previous fleet of cars are retired, a statement said.

Emirates has been using Volvo cars for the service in the UAE.

The BMW 520i Touring, which offers generous luggage space, claims to be the ‘most connected vehicle in its segment’, with options such as a WLAN hotspot for mobile devices and wireless charging.

Johannes Seibert, managing director of BMW Group Middle East, said: “Our common goal is to enhance the passenger’s travel experience even further – by ensuring a luxury experience throughout their entire journey – from ground to sky and back.”

Emirates’ chauffeur-drive service is a complimentary ground transfer service available to customers travelling in first or business class and is available in over 75 of its destinations worldwide.

The car fleet upgrade is part of Emirates’ ongoing investment in products and services – onboard and on the ground.

Earlier this year, the Dubai airline revealed a multi-million dollar cabin interiors upgrade programme for both its A380 and Boeing 777 fleet.

As part of the programme Emirates unveiled an enhanced onboard lounge for its Airbus A380 aircraft.

The new lounge, publicly unveiled at trade fair ITB Berlin in March, is being installed in one of Emirates’ brand new A380 aircraft and will make its operational debut in July 2017.

Also see: Video: Dubai’s Emirates to revamp A380 onboard lounge

Last week, the carrier also announced that it will unveil a new first class product for its Boeing 777-300ER aircraft at the Dubai Air Show in November.

The new first class cabin will feature six private suites laid out in a 1-1-1 layout, compared to the existing eight private suites in a 1-2-1 layout on Emirates’ existing 777 fleet.

The airline’s new Boeing 777-300ER will also include other new features in the business and economy class cabins, a statement said, without elaborating.